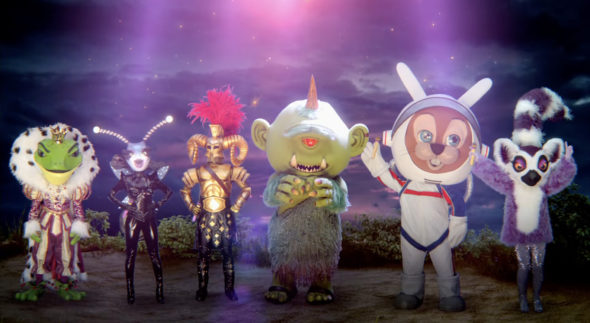 FOX is getting ready to launch season seven of The Masked Singer and viewers are being given their first look at six of the costumed characters. Names for the characters weren’t revealed. Those contestants and others not shown will be split into three groups this time around – The Good, The Bad, and The Cuddly.

The mystery singing competition series is hosted by Nick Cannon and features panelists Jenny McCarthy, Nicole Scherzinger, Ken Jeong, and Robin Thicke. The show features singing celebrities facing off against one another with one major twist — each contestant is covered from head to toe in an elaborate costume, complete with a full face mask to conceal his or her identity.

The FOX series returns on March 9th and more details about the characters will be revealed leading up to the premiere.

Check out the preview for The Masked Singer season seven below.

What do you think? Are you excited about the return of The Masked Singer on FOX?

Is this show for people who don’t have cable? I can’t imagine anyone actually wanting to watch this.

I agree with Donna – better than death & gloom! A friend and I look forward to every season! The show makes some changes each season to keep your interest so it isn’t as predictable as “The Voice.”

Getting less and less interested in this, the panel are a bore and need a new schtick…. and rather obviously, if you’re not an American resident, at least half of these people mean nothing at all to us…. Earlier episodes where the talents of a very obvious Dionne Warwick left too early just tell us how wrong this premise is. On the plus side, its interesting to see the dreaded Fox Network throw more and more money at this show, like any old cash cow, those Murdochs sure know how to put all their eggs in one or two baskets.

I love this show. Entertaining and different, a break from death and gloom. I really enjoyed the avatar and show me your voice show too.