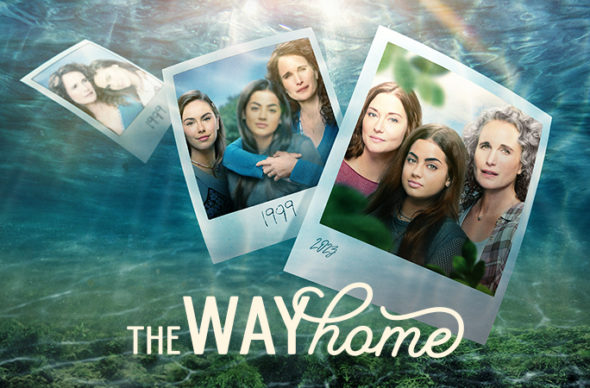 At one time, Hallmark Channel had several original scripted series on its roster. Once Chesapeake Shores ended, Hallmark only had When Calls the Heart, and that series has been around for nearly a decade. Is this a good sign for the newest introduced drama? Does The Way Home? have a better chance of being renewed for a second season, or could it still be cancelled?  Stay tuned.

A multi-generational family drama series, The Way Home TV show stars Andie MacDowell, Chyler Leigh, Evan Williams, and Sadie Laflamme-Snow, with Alex Hook, Al Mukadam, Jefferson Brown, David Webster, and Siddarth Sharma. The story follows the lives of three generations — Kat Landry (Leigh), her 15-year-old daughter Alice (Laflamme-Snow), and Kat’s mother, Del (MacDowell). After being away from her small farm hometown for 20 years, Kat finds her life is falling apart. She receives a letter from her mother and moves back home to the family farm with her daughter in tow. As the three generations of women slowly work on finding their footing as a family, they embark on an enlightening and sometimes surprising journey that none of them had imagined was possible.

What do you think? Do you like The Way Home TV series on Hallmark Channel? Should it be cancelled or renewed for a second season?

It increased ratings in week 2 which is impressive.

I was pleasantly surprised and intrigued by The Way Home. Actually, so was my husband. He reminded me that the second episode was on tonight.

I thought it was dark and did not keep my interest. Will not watch again and I am a fan of Hallmark series. Sorry the Good Witch and Chesapeake Shores were cancelled. Much better than this one!!.

First episode was better than anticipated. I’m not a fan of Andie MacDowell, but I like Chyler Leigh.