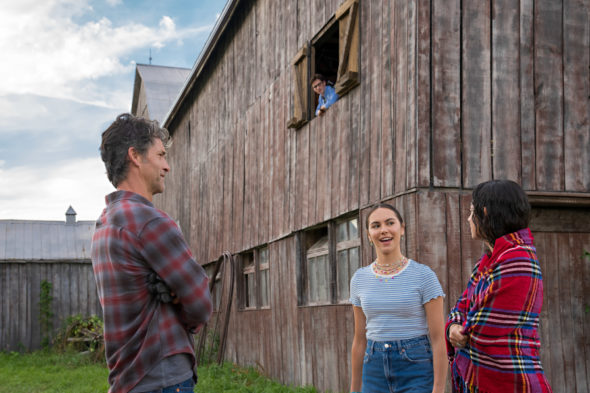 Three strong women try to find common ground in The Way Home TV show on Hallmark Channel. As we all know, Nielsen ratings typically play a big role in determining whether a TV show like The Way Home is cancelled or renewed for season two. Unfortunately, most of us do not live in Nielsen households. Because many viewers feel frustrated when their viewing habits and opinions aren’t considered, we invite you to rate all of the first season episodes of The Way Home here.

A Hallmark multi-generational family drama series, The Way Home TV show stars Andie MacDowell, Chyler Leigh, Evan Williams, and Sadie Laflamme-Snow, with Alex Hook, Al Mukadam, Jefferson Brown, David Webster, and Siddarth Sharma. The story follows the lives of three generations — Kat Landry (Leigh), her 15-year-old daughter Alice (Laflamme-Snow) and Kat’s mother, Del (MacDowell). After being away from her small farm hometown for 20 years, Kat finds her life is falling apart. She receives a letter from her mother and moves back home to the family farm with her daughter in tow. As the three generations of women slowly work on finding their footing as a family, they embark on an enlightening and sometimes surprising journey that none of them had imagined was possible.

What do you think? Which season one episodes of The Way Home TV series do you rate as wonderful, terrible, or somewhere between? Do you think that The Way Home should be cancelled or renewed for a second season on Hallmark Channel?

The first few episodes were hard to follow. The 1/29/23 episode gave me new understanding of the show. I’m hooked and hope Hallmark renews the show.

I don’t know why a couple of people left negative comments on here. You could tell from the previews that it was going to be about time travel and it was very easy to follow from the very beginning of the first episode. I think this is one of the best shows on hallmark. I don’t like those goofy love stories and I don’t watch the goofy love Christmas stories that they have on and this is really something different and unique. Maybe there’s been a big change at Hallmark but this series is great I’m actually enjoying something from… Read more »

Do not understand this show. I really wanted to like it but it is too far out there.

Acting is terrible. Depressing. Laughter is even bad.

Loved the show
Can’t wait for next week.

Good show can’t wait for the next episode M