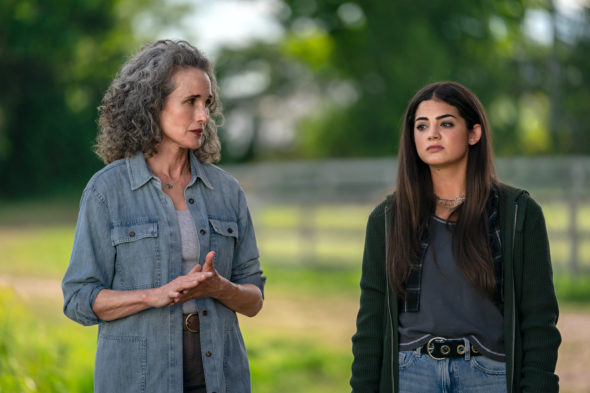 Sometimes it can take a while to find your way. Has The Way Home TV show been cancelled or renewed for a second season on Hallmark Channel? The television vulture is watching all the latest cancellation and renewal news, so this page is the place to track the status of The Way Home, season two. Bookmark it, or subscribe for the latest updates. Remember, the television vulture is watching your shows. Are you?

A multi-generational family drama series airing on the Hallmark Channel cable channel, The Way Home TV show stars Andie MacDowell, Chyler Leigh, Evan Williams, and Sadie Laflamme-Snow, with Alex Hook, Al Mukadam, Jefferson Brown, David Webster, and Siddarth Sharma. The story follows the lives of three generations — Kat Landry (Leigh), her 15-year-old daughter Alice (Laflamme-Snow), and Kat’s mother, Del (MacDowell). After being away from her small farm hometown for 20 years, Kat finds her life is falling apart. She receives a letter from her mother and moves back home to the family farm with her daughter in tow. As the three generations of women slowly work on finding their footing as a family, they embark on an enlightening and sometimes surprising journey that none of them had imagined was possible.

The first season of The Way Home averages a 0.11 rating in the 18-49 demographic and 1.46 million viewers. While these numbers don’t include further delayed or streaming viewing, they are a very good indicator of how a show is performing, especially when compared to others on the same channel. There can be other economic factors involved in a show’s fate, but typically the higher-rated series are renewed and the lower-rated ones are cancelled. Find out how The Way Home stacks up against other Hallmark Channel TV shows.

Will Hallmark Channel cancel or renew The Way Home for season two? The channel has aired several drama series over the years but now only has one left — When Calls the Heart — and that show’s been around for nearly a decade. If Hallmark wants to stay in the scripted series business, the channel needs new shows, and this one seems like a good fit. There’s a strong chance that The Way Home will be renewed. I’ll update this page with breaking developments. Subscribe for free alerts on The Way Home cancellation or renewal news.

What do you think? Do you hope The Way Home TV show will be renewed for a second season? How would you feel if Hallmark Channel cancelled this TV series, instead?