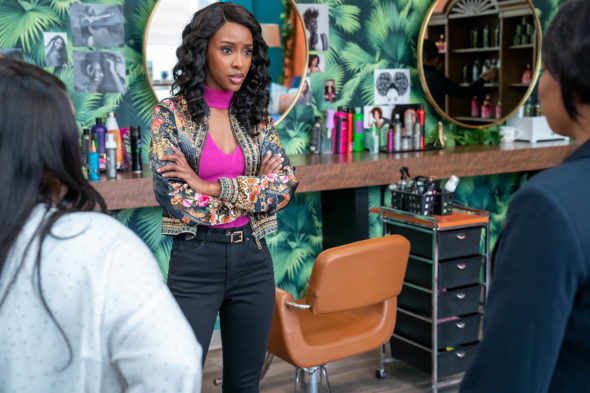 Viewers of Tyler Perry’s Sistas TV series won’t have long to wait for new episodes. The third season’s finale aired tonight on BET and the cable channel has now announced that season four will kick off in a couple of weeks, on Wednesday, January 5th.

THE #1 CABLE SERIES FOR BLACK VIEWERS “TYLER PERRY’S SISTAS” RETURNS WITH NEW SEASON WEDNESDAY, JANUARY 5 AT 9 PM ET/PT ON BET AND BET HER

In Season four, Andi played by KJ Smith finally focuses on her own wants and needs when it comes to her personal life. While continuing to be a top-notch lawyer, Andi tests the waters with the possibility of a new relationship on the horizon. Gary played by Chido Nwokocha, however, goes above and beyond in an attempt to get Andi to commit to him, and only him.

Danni played by Mignon, opens the season showing Preston how she really feels about their relationship now that El Fuego is in the picture. Eventually, things get complicated when Preston played by Trinity Whiteside, begins exhibiting uncharacteristic like behavior to win Danni’s attention.

Karen played by Ebony Obsidian, finds herself consumed with Zac’s personal life this season. Karen’s emotions overtake her as she tries to reconcile her feelings between Zac played by DeVale Ellis, and Aaron played by Kevin A. Walton.

Sabrina played by Novi Brown, is the listening ear to her girlfriends and their drama, but she makes sure she doesn’t forget about Maurice played by Brian Jordan Jr. While still dating Calvin played by Anthony Dalton II, Sabrina embarks on a new journey that could lead to newfound love.

Fatima played by Crystal Renee’ Hayslett, basks in her love for Zac and makes it known to anyone who questions their relationship. Although Fatima finds herself facing new challenges in her relationship with Zac, her feet are firmly planted. Now that things are looking up for Zac, he and Fatima shift their focus to themselves and their future together.

In the premiere episode #401, titled “A Brick Wall,” premieres Wednesday, January 5, at 9 PM ET/PT– Danni finds herself in a compromising predicament and receives unsolicited help from El Fuego. While Karen must figure out how to deal with an unexpected visitor inquiring about Zac. #SistasonBET

About “Tyler Perry’s Sistas”
The one-hour drama follows a group of single Black females as they navigate their “complicated love life,” careers and friendship through the ups and downs of living in a modern world of social media and unrealistic relationship goals. Executive Producer, Director and Writer Tyler Perry takes viewers on an exhilarating ride of emotions and gut-busting predicaments that will test the ladies’ long-standing friendship. This band of women, intertwined with their newfound relationships, must navigate this new-age dating scene as they continue to search for love in their 30’s.

About Tyler Perry Studios
Tyler Perry Studios is a state-of-the-art film and television production facility founded in 2006 by actor, producer, filmmaker, playwright, and philanthropist Tyler Perry. Located in Atlanta, Georgia on the historic grounds of the former Fort McPherson army base, the new 330-acre campus is one of the largest production studios in the country. It boasts a variety of shooting locations including 40 buildings on the national register of historic places, 12 purpose-built sound stages, 200 acres of green space and an expansive backlot.

What do you think? Do you keep up with the Sistas TV series on BET? Are you planning to watch season four in January?

Most definitely i can’t wait?