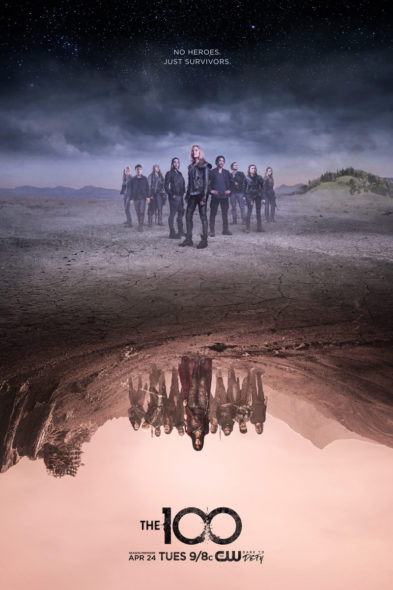 How do the survivors fare during the fifth season of The 100 TV show on The CW? As we all know, the Nielsen ratings typically play a big role in determining whether a TV show like The 100 is cancelled or renewed for season six. Unfortunately, most of us do not live in Nielsen households. Because many viewers feel frustration when their viewing habits and opinions aren’t considered, we’d like to offer you the chance to rate all of The 100 season five episodes here.

A CW sci-fi drama, The 100 Eliza Taylor, Paige Turco, Bob Morley, Marie Avgeropoulos, Lindsey Morgan, Christopher Larkin, Henry Ian Cusick, and Tasya Teles. The dystopian series centers on a post-apocalyptic group of survivors, who believe their people are all that is left of mankind. When they return to Earth, they realize they aren’t the only ones.

Season five kicks off six years after the season four finale, with our heroes still separated. While Bellamy’s (Morely) team is in space, Clarke (Taylor) is on the ground, and hundreds are trapped in the bunker below. When a prison ship descends upon the last habitable spot on the planet, The 100 must unite to reclaim their home. Expect alliances to shift as war threatens to to wipe out the remnants of humanity.

What do you think? Which season five episodes of The 100 TV series do you rate as wonderful, terrible, or somewhere between? Should The CW cancel or renew The 100 for a sixth season? Don’t forget to vote, and share your thoughts, below.

the best sci-fi I have seen since original star trek. Please try to continue there plight.

I can only watch it on the CW channel on Roku. This also gives me a chance to binge watch two episodes at a time. Kids aren’t going to find this article in the news reel in an android news feed. Find a way to reach them to get them to vote and find out how they are watching. I don’t know anyone who watches TV according to their clock anymore. I would be so hurt and angry if you gave up before you finished the storyline. I would have wasted 5 years of my life waiting for answer that… Read more »

I hate Echo, I especially hate her with Bellamy. It is a shame that nothing is similar to the books but for a few names. It is very disappointing that the show has become so predictable, is Jason Rothenberg getting lazy? Season 1 is still my favorite, before the Ark came down to earth and before MT.. Weather.

I have been waiting a long time for a show like this. I love the power that Octavia has. I would like to see Lincoln come back to life again somehow. Please give me more of this show.

There’s something about a broad being caught in a bear trap that’s really funny to me. I don’t think any of these people could survive 20 minutes out in the wild. 🙂