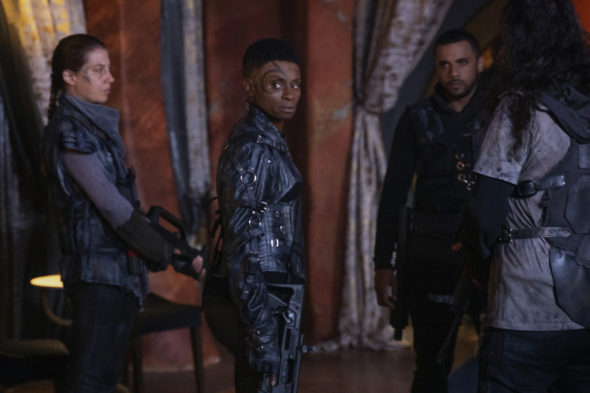 How will the seventh season of The 100 TV show on The CW end? As we all know, the Nielsen ratings typically play a big role in determining whether a TV show like The 100 is cancelled or renewed for season eight (in this case, we know season seven is the end). Unfortunately, most of us do not live in Nielsen households. Because many viewers feel frustration when their viewing habits and opinions aren’t considered, we invite you to rate all of the seventh season episodes of The 100 here.

A CW sci-fi drama, The 100 stars Eliza Taylor, Bob Morley, Marie Avgeropuolos, Lindsey Morgan, Richard Harmon, Tasya Teles, Shannon Kook, JR Bourne, Shelby Flannery, and Chuku Modu. The dystopian series centers on a post-apocalyptic group of survivors, who believe their people are all that is left of mankind. They wake from 125 years in cryosleep to discover they have been brought to a habitable place named Sanctum. It’s ruled by families called the Primes but there are also rebels known as the Children of Gabriel. Season seven picks up with the inhabitants trying to find a way to live together.

What do you think? Which season seven episodes of The 100 TV series do you rate as wonderful, terrible, or somewhere between? Do you think that The 100 should have been renewed for an eighth season on The CW? Don’t forget to vote, and share your thoughts, below.

I am hoping for a prequel! The only tv series I have watched from beginning to end and have stuck with it. I think a prequel is totally nessary. Jason is very talented and would love to see how he pulls this all together. The grounders and the Ark from the start brilliant!

Please please please please RENEW this show back!!!!!!!! It’s so good!!! It’s been along time since something good like this has been on tv/Netflix! I actually found it on Netflix & have been glued. I’m down to the last season & google for season 8 & was very sad to know the show will be ending. Please keep it going!!!!

Please continue this show for as long as possible. There are many scenarios that could take place. This is one of only a few shows that I watch any more and a few of them are being canceled. Soon it may be time for me to just rely on DVDs for entertainment if all the good shows are canceled.

Hundred has always been a interesting Sci-fi series. The remaining survivors. come back to Earth . To find Earth has changed. There are so many way’s to go with this series. So many new challenges the survivors have to meet. If you have a good team of writers with a good imagination.