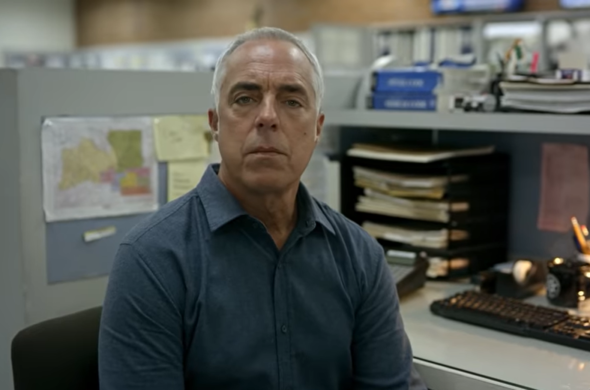 It’s nearly time to say goodbye to Bosch — the series, not the character. Amazon Prime Video has announced that the seventh and final season of the Bosch TV show will be released on Friday, June 25th. There are eight episodes.

Though this show is ending, it’s been announced that Titus Welliver, Mimi Rogers, and Madison Lintz have been signed to reprise their roles for an as-yet-untitled spin-off series. The new show will stream on the free IMDb TV service and will follow Harry Bosch (Welliver) as he embarks on the next chapter of his career. He finds himself working with his one-time enemy and top-notch attorney Honey “Money” Chandler (Rogers). With a deep and complicated history between this unlikely pair, they work together to do what they can agree on — finding justice.

Here’s more information about the seventh and final season of Bosch from Amazon Prime Video:

Based on the Best-Selling Michael Connelly Novels, the Final Season puts Detective Harry Bosch’s Famous Motto Center Stage: “Everybody Counts or Nobody Counts”

CULVER CITY, California – May 13, 2021 – The longest-running Amazon Original Series, Bosch, will premiere all eight episodes of its seventh and final season on Friday, June 25, exclusively on Amazon Prime Video.

About Prime Video Prime Video offers customers a vast collection of movies, series, and sports – all available to watch on hundreds of compatible devices.

· Prime Video Channels: Prime members can add channels like discovery+, CBS All Access, BET+, EPIX, Noggin, NBA League Pass, MLB.tv, STARZ and SHOWTIME – no extra apps to download, and no cable required. Only pay for the ones you want, and cancel anytime. View the full list of channels available at amazon.com/channels.

Prime Video is just one of many shopping and entertainment benefits included with a Prime membership, along with fast, free shipping on millions of Prime-eligible items at Amazon.com, unlimited photo storage, exclusive deals and discounts, and access to ad-free music and Kindle eBooks. To sign up or start a 30-day free trial of Prime, visit: amazon.com/prime.

What do you think? Are you looking forward to watching the seventh and final season of the Bosch TV series? Will you check out the spin-off?

I’ve been anxiously awaiting for this announcement. While I hate that this is the last season, I’m glad they will continue on in the new spin off. I will be happy to see how the new show develops the characters and storylines.

We LOVE this show!! Titus Welliver plays this part so amazing! So addicting,, just pulls you in!! Sad to see it go but look forward to the spin off!

I love this. I have been a Michael Connelly/Bosch fan since initial publication. I have loved Bosch on Prime and Titus Welliver and all the other actors on this are superb. I know nothing about IdMB (?) but I am going to find out.

This sound good check this crime drama on amazon prime look so good never watched I can’t wait to see binge watch it.

Go for it, John. You will love it!