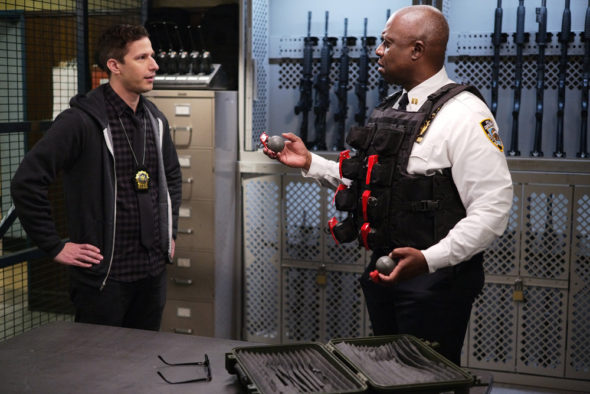 Brooklyn Nine-Nine is coming to an end for a second time. NBC announced that the series would end with its eighth season during the 2021-22 season.

Shortly after the announcement, the cast and co-creator went to social media to share their thoughts on Brooklyn Nine-Nine ending for a second time. The series originally aired on FOX for five seasons before it was cancelled and then saved by NBC.

Dan Goor, the co-creator of the comedy, shared the following about the end of the series:

“The way I see it, if this is to be our last ride then let us go out in a blaze of glory.” pic.twitter.com/HBVVV5cRJc

Members of the cast and crew followed with their statements not long after.

It has been one of the greatest joys and honor of my life to play Amy. I am so grateful to be able to take a victory lap with our beloved cast and crew. To our amazing fans, we love you. No tears for now, we still have a whole season to shoot! 🚨❤️ https://t.co/WsbCyhr5WC

I’m sad it will end, but happy to have had the chance to be a part of something so special.

Brooklyn Nine-Nine was my first narrative writing job. I’m grateful to have written on the last two seasons and looking forward to the last season, in which I got to co-wrote the season premiere, to air in the fall. https://t.co/1CmagVzEpa

The awesomeness of getting to go 153/ 153 is only compounded by the joy that my tenure was spent on this show with this cast and crew. I made a few lifelong friends working here. Thanks for the buzz, @djgoor @KenTremendous https://t.co/McwhQUrAwe

This is something I’ll probably never be able to say again, but I spent 7 years on one show and it was the best experience of my life. From picking up lunches as an Office PA, to writing for the final season, and everything in between… thank you Brooklyn Nine-Nine. https://t.co/Aa9q6WFAhh

What do you think? Are you sad to see Brooklyn Nine-Nine come to an end on NBC or, is it time?

Love this show and DO NOT want to see it end!! Hopefully another network will come in and save this show, it is Hilarious!!!

Have loved the show but it is probably time to wrap. Fun characters who will always remain special. Make this last go round a great one.