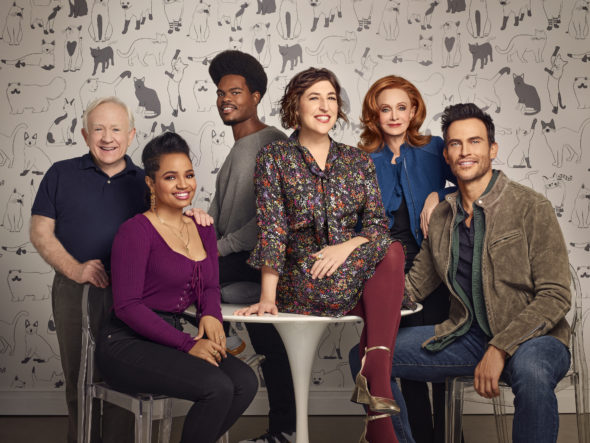 TV show description:
A multi-camera comedy series, the Call Me Kat TV show is based on the Miranda series, a British comedy created by Miranda Hart. The sitcom follows Kat (Bialik), a woman who struggles every day against society and her mother to prove that she can live a happy and fulfilling life — despite still being single at 39 years old.

It was expected that Kat would be married with kids by now, but for many reasons, she’s still single and totally fine with it. Kat’s mother, Sheila (Kurtz), views her daughter being single as her own personal failure, but Kat remains determined to live a fulfilling life and charts her own course to happiness.

After leaving her job as a University of Louisville college professor, Kat spends the money her parents had set aside for her wedding to open a cat café.

Working alongside Kat are Randi (Pratt), a confident millennial and self-proclaimed “non” cat person, and Phil (Jordan), who recently broke up with his longtime partner.

As Kat celebrates her independence, her single-forever plans begin to veer off-course. Her former crush and good friend, Max (Jackson), returns to town. He takes a job as a bartender at the piano bar across the street and works with his friend, Carter (Gant).

What do you think? Do you like the Call Me Kat TV show? Do you think it should be cancelled or renewed for another season?

I LOVE THIS SHOW! It is continuously funny from beginning to end!!! Fresh and leaves me wanting more.

Th was such a funny show.
I love the interactiion between Cat and Max

This show is about as funny as a funeral procession.

I absolutely LOVE this show; it appeals to my wit/humor. It is refreshing and fun!! It is the one show on tv that makes us belly laugh – which we need desperately right now.

Sorry, tried to watch this, couldn’t get past 15 min. Not the least bit funny. Dont like the character talking to us, the audience. I enjoyed her in the Big Bang Theory, thought she was funny there, but not in this show.

I thought that it was hilarious