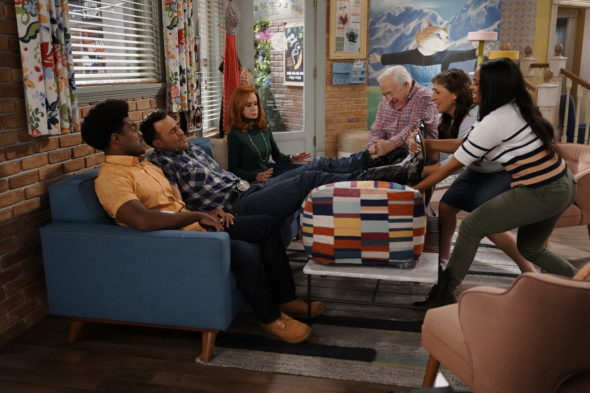 Kat will surely get into more trouble in the third season of FOX’s Call Me Kat TV show. As we all know, Nielsen ratings typically play a big role in determining whether a series like Call Me Kat is cancelled or renewed for season four. Unfortunately, most of us do not live in Nielsen households. Because many viewers feel frustrated when their viewing habits and opinions aren’t considered, we invite you to rate all of the third season episodes of Call Me Kat here.

A FOX multi-camera comedy series, the Call Me Kat TV show is based on the British Miranda series and stars Mayim Bialik, Swoosie Kurtz, Kyla Pratt, Cheyenne Jackson, Leslie Jordan, and Julian Gant. Guests in season three include Ken Jennings, Kevin Sussman, and Parker Young. The story follows Kat (Bialik), a woman who struggles every day against society (and her mother) to prove that she can live a happy and fulfilling life — despite still being single at 39 years old. Kat’s mother, Sheila (Kurtz), views her daughter being single as her own personal failure. After leaving her job as a University of Louisville college professor, Kat spends the money her parents had set aside for her wedding to open a cat café. Working alongside Kat at the cafe are her friends, artist Randi (Pratt) and Phil (Jordan), a baker. As Kat celebrates her independence, her single-forever plans begin to veer off-course when her former crush and good friend, Max (Jackson), returns to town. Max takes a job as a bartender at the piano bar across the street from Kat’s place and works with his friend, Carter (Gant).

What do you think? Which season three episodes of the Call Me Kat TV series do you rate as wonderful, terrible, or somewhere between? Do you think that Call Me Kat should be cancelled or renewed for a fourth season on FOX?

I like the shows theme. I have view Mayim Bialik as a child actor. However, I feel a little less on the sexuality references or sexual comments and make it a pure show it might just out do the Big Bang Theory.

Please reconsider in boost your number ratings for look forward to seeing it every Thursday night at 9:30pm. Enjoy it and love it. Miriam Bialik so funny best character on this show so good.

I love Call Me Cat

Look forward forward forward to seeing it every Thursday night . Enjoy it and love it. Miriam Bialik so funny in Blossom love her actress. Such a great cast . Pure funny .