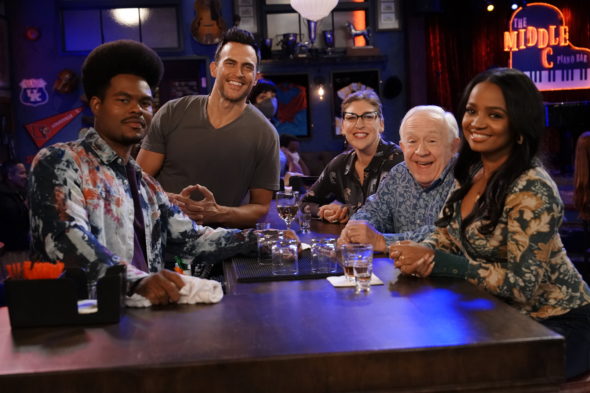 Kat keeps searching for her purpose. Has the Call Me Kat TV show been cancelled or renewed for a fourth season on FOX? The television vulture is watching all the latest cancellation and renewal news, so this page is the place to track the status of Call Me Kat, season four. Bookmark it, or subscribe for the latest updates. Remember, the television vulture is watching your shows. Are you?

Airing on the FOX television network, the Call Me Kat TV show is based on the British Miranda series and stars Mayim Bialik, Swoosie Kurtz, Kyla Pratt, Cheyenne Jackson, Leslie Jordan, and Julian Gant. Guests in season three include Ken Jennings, Kevin Sussman, and Parker Young. The story follows Kat (Bialik), a woman who struggles every day against society (and her mother) to prove that she can live a happy and fulfilling life — despite still being single at 39 years old. Kat’s mother, Sheila (Kurtz), views her daughter being single as her own personal failure. After leaving her job as a University of Louisville college professor, Kat spends the money her parents had set aside for her wedding to open a cat café. Working alongside Kat at the cafe are her friends, artist Randi (Pratt) and Phil (Jordan), a baker. As Kat celebrates her independence, her single-forever plans begin to veer off-course when her former crush and good friend, Max (Jackson), returns to town. Max takes a job as a bartender at the piano bar across the street from Kat’s place and works with his friend, Carter (Gant).

The third season of Call Me Kat averages a 0.21 rating in the 18-49 demographic and 1.18 million viewers in the live+same day ratings (includes all DVR playback through 3:00 AM). Compared to season two, that’s down by 39% in the demo and down by 35% in viewership. While these numbers don’t include further delayed or streaming viewing, they are a very good indicator of how a show is performing, especially when compared to others on the same channel. There can be other economic factors involved in a show’s fate, but the higher-rated series are usually renewed and the lower-rated ones are cancelled. Find out how Call Me Kat stacks up against other FOX TV shows.

Will FOX cancel or renew Call Me Kat for season four? This show has done okay in the ratings but certainly can’t be called a hit. However, the show is owned by FOX, so the network makes money from the series in other ways, like streaming and international sales. Since Call Me Kat has made it to season three and it’s one of the few shows to be produced by FOX, I think there’s a good chance that it will be renewed for a fourth year. I’ll update this page with breaking developments. Subscribe for free alerts on Call Me Kat cancellation or renewal news.

What do you think? Do you hope that the Call Me Kat TV show will be renewed for a fourth season? How would you feel if FOX cancelled this TV series, instead?

I love that show. I enjoy the antics of The whole team on Call me Kat. So sorry we lost Leslie.

Please reconsider in boost your number ratings so funny . Miriam Bialik so funny actress love this cast too. Pure funny love it and enjoy it all episodes of it.