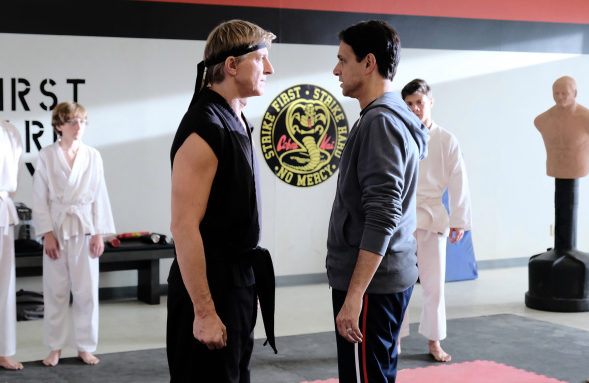 Cobra Kai is not ending its training anytime soon. Netflix has renewed the series for a fifth season ahead of its fourth season premiere which is set for December.

The Cobra Kai series is a continuation of the popular 1980s Karate Kid movie franchise with Ralph Macchio returning as Daniel LaRusso. The comedy-drama series has seen Daniel battling his old foe, Johnny Lawrence (William Zabka), but by the end of the third season they had joined forces to go up against a bigger foe – John Kreese (Martin Kove).

Netflix revealed more about Cobra Kai in a press release.

“Netflix has renewed Cobra Kai, the series continuation of the iconic The Karate Kid film franchise, for a fifth season with production set to start in Atlanta this fall.

COBRA KAI takes place over 30 years after the events of the 1984 All Valley Karate Tournament with the continuation of the inescapable conflict between Daniel LaRusso (Ralph Macchio) and Johnny Lawrence (William Zabka).”

The dojo is about to be 5x as rad. Cobra Kai has been renewed for a 5th season. pic.twitter.com/8iz2M6Bzw5

What do you think? Are you a fan of Cobra Kai on Netflix? Do you plan to watch the next two seasons of the series when they arrive?

This is terrific news! Really gives me something to look forward toand boy, do I need that.