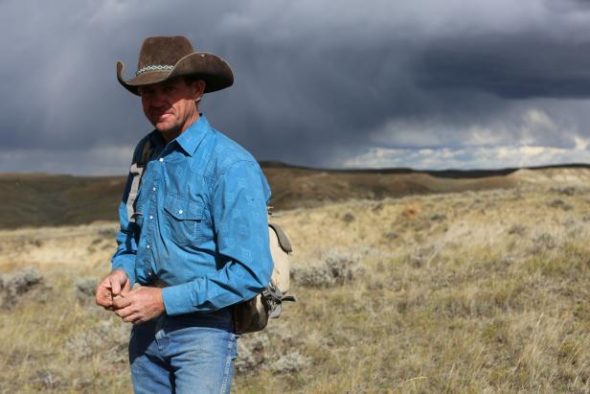 Dino Hunters is a new series coming soon to Discovery Channel. A group of cowboys is on the search for fossils in Wyoming, Montana, North Dakota, and South Dakota.

The cable channel released a trailer and a press release that shares some additional details for this new series, including a premiere date.

“Across the West, the stage is set for a new type of gold rush: the hunt for prehistoric dinosaur fossils. In the badlands of Wyoming, Montana and the Dakotas, ranchers and cowboys are uncovering valuable dinosaur bones on their land and using the discoveries to help save their livelihoods. The stakes to advance the understanding of prehistoric creatures are high and so is the possible payday as these fossils can be worth millions.

In the all new series DINO HUNTERS, cowboys and ranchers rely on their deep knowledge of the land to search for prehistoric dinosaur fossils – from T-Rexes and Triceratops to discovering a rare and disputed dinosaur species that might very well have scientific impact well beyond the tv series.

DINO HUNTERS premieres Friday, June 19 at 9pm ET/PT on Discovery Channel. In addition to watching the series on Discovery, viewers can watch DINO HUNTERS by downloading the Discovery GO app. Fans can join the conversation on social media with the hashtag #dinohunters. Follow Discovery on Facebook, Instagram, and Twitter for the latest updates.

The series brings these creatures back to life by using a combination of 3D modeling and Computer-Generated Imagery (CGI) to create X-ray visualizations of both the fossils and the dinosaurs. The spectacular images reveal what the dinosaur looked like, how they moved, and other important characteristics of these prehistoric giants.”

What do you think? Are you going to check out this new Discovery Channel series? Would you want to join the Dino Hunters in their search?

Dino Hunters is a great change from the usual shows and so exciting! The whole family loves it! Please bring it back!! It’s especially amazing since I’m familiar with the areas they hunt in.

We want more, more, more. So impressed with the entire production. The CGI is amazing and helpful. It has the attention of our grandchildren from ages 3 to 14! It’s a show for all ages! Sign us up for a Dino Hunter Dig Camp!

Love Dino Hunters!!! Hope you renew it for a 2nd season!!

I love this show, I told my neighbor and she told her sister and they both love it. We can hardly wait for season 2. Hopefully there will be a season 2!! And 6 episodes is NOT enough!!