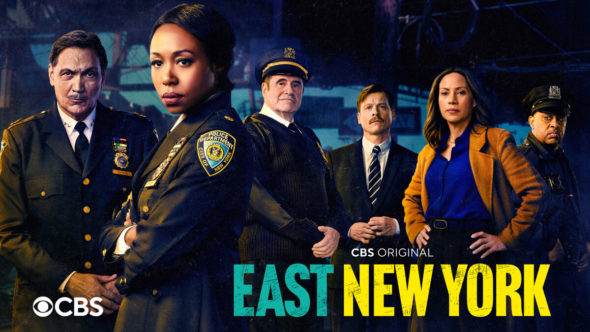 Though it’s been airing on Friday nights (an evening with lower TV viewership) for over a decade, Blue Bloods is one of CBS’ most-watched scripted series. Now, the network has introduced another police procedural series, East New York. Will this new show attract a big audience too? Will East New York be cancelled or renewed for season two? Stay tuned.

A drama series, the East New York TV show stars Amanda Warren, Jimmy Smits, Ruben Santiago-Hudson, Kevin Rankin, Richard Kind, Elizabeth Rodriguez, Olivia Luccardi, and Lavel Schley. The story revolves around the officers and detectives of the 74th precinct in the East New York neighborhood of Brooklyn. It’s a working-class neighborhood amid social upheaval while the early seeds of gentrification have been planted. Deputy Inspector Regina Haywood (Warren) is the newly promoted boss of the precinct who has family ties to the area. She’s determined to deploy creative methods to protect her beloved community with the help of her officers and detectives. Her team includes Chief John Suarez (Smits); training officer Marvin Sandeford (Santiago-Hudson); Detective Tommy Killian (Rankin); Captain Stan Yenko (Kind); Detective Crystal Morales (Rodriguez); trainee Andre Bentley (Schley); and patrol officer Brandy Quinlan (Luccardi). Regina Haywood has a vision. She and the squad of the 74th Precinct will not only serve their community – they’ll also become part of it.

What do you think? Do you like the East New York TV series on CBS? Should it be cancelled or renewed for a second season?

Pls keep East New York series. Each member if the cast portrays their role extremely well and the story lines are interesting and entertaining. One of my very favorite TV shows,

Just watched all the episodes on Paramount+…absolutely loved it!! Hope there will be a season 2.

In a busy precinct how is the woman in charge involved in every crime. And the one older black cop the only one working. This show is falling all over itself to be politically correct. This show may hit all the right racial notes except the one that makes it believable. Say bye bye.

I love this show. Characters are evolving. It’s refreshing to see a show that is apolitical. The plots will evolve more and more, just like the characters. I hope it stays on.

Gave it another try and I found it boring. Jimmy Smitts is a boring actor, no life or facial expressions. I don’t think the show will last.

I agree with the below statement. I didn’t think it was a great show. I may watch one more episode. Don’t think it will last.

I watched East New York last night. I didn’t like it tok much. I don’t know, maybe I just need a few more episodes to get into it.