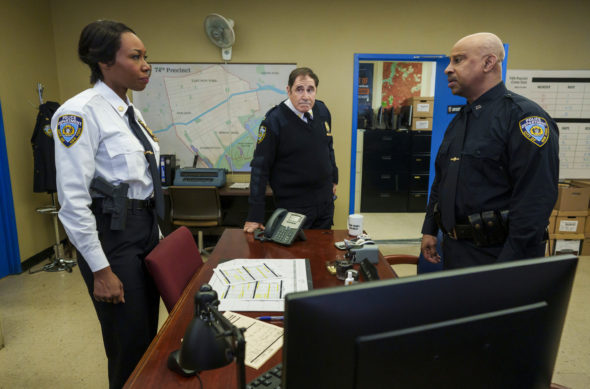 Regina Haywood may have bitten off more than she can chew in the first season of the East New York TV show on CBS. As we all know, Nielsen ratings typically play a big role in determining whether a TV show like East New York is cancelled or renewed for season two. Unfortunately, most of us do not live in Nielsen households. Because many viewers feel frustrated when their viewing habits and opinions aren’t considered, we invite you to rate all of the first season episodes of East New York here.

A CBS police procedural series, the East New York TV show stars Amanda Warren, Jimmy Smits, Ruben Santiago-Hudson, Kevin Rankin, Richard Kind, Elizabeth Rodriguez, Olivia Luccardi, and Lavel Schley. The story revolves around the officers and detectives of the 74th precinct in the East New York neighborhood of Brooklyn. It’s a working-class neighborhood amid social upheaval while the early seeds of gentrification have been planted. Deputy Inspector Regina Haywood (Warren) is the newly promoted boss of the precinct who has family ties to the area. She’s determined to deploy creative methods to protect her beloved community with the help of her officers and detectives. Her team includes Chief John Suarez (Smits); training officer Marvin Sandeford (Santiago-Hudson); Detective Tommy Killian (Rankin); Captain Stan Yenko (Kind); Detective Crystal Morales (Rodriguez); trainee Andre Bentley (Schley); and patrol officer Brandy Quinlan (Luccardi). Regina Haywood has a vision. She and the squad of the 74th Precinct will not only serve their community – they’ll also become part of it.

What do you think? Which season one episodes of the East New York TV series do you rate as wonderful, terrible, or somewhere between? Do you think that East New York should be cancelled or renewed for a second season on CBS?

Not sure why this show isn’t listed on 2022-23 NETWORK SHOW RANKINGS
Really great show, look forward to every episode!

It is currently ranked at #29.
https://tvseriesfinale.com/tv-show/viewer-votes-ranking-for-the-2022-23-network-tv-shows/

ok, I was going by ratings on this page

We really enjoy this show, weren’t sure at first but glad we stayed with it.

Sundays CBS lineup you cannot really go by the ratings.
Because things start late which make other shows start late. So people are watching something else. Or they have to extend their DVR recording to end late. Which skews the results of the ratings.

I will tune into a few more episodes before passing judgement on this series.

This show is wonderful- depth of character- shows strength in women characters- teamwork- shows entirety of what big city policing is more about.
Can’t wait to see more.
And this cliffhanger……………………….Love Lavel Schey – and his storylines- KEEP HIM!!