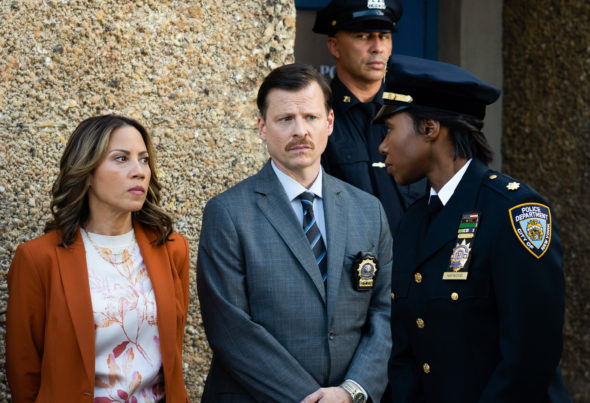 Regina’s needs to get her entire team behind her vision. Has the East New York TV show been cancelled or renewed for a second season on CBS? The television vulture is watching all the latest cancellation and renewal news, so this page is the place to track the status of East New York, season two. Bookmark it, or subscribe for the latest updates. Remember, the television vulture is watching your shows. Are you?

Airing on the CBS television network, the East New York TV show stars Amanda Warren, Jimmy Smits, Ruben Santiago-Hudson, Kevin Rankin, Richard Kind, Elizabeth Rodriguez, Olivia Luccardi, and Lavel Schley. The story revolves around the officers and detectives of the 74th precinct in the East New York neighborhood of Brooklyn. It’s a working-class neighborhood amid social upheaval while the early seeds of gentrification have been planted. Deputy Inspector Regina Haywood (Warren) is the newly promoted boss of the precinct who has family ties to the area. She’s determined to deploy creative methods to protect her beloved community with the help of her officers and detectives. Her team includes Chief John Suarez (Smits); training officer Marvin Sandeford (Santiago-Hudson); Detective Tommy Killian (Rankin); Captain Stan Yenko (Kind); Detective Crystal Morales (Rodriguez); trainee Andre Bentley (Schley); and patrol officer Brandy Quinlan (Luccardi). Regina Haywood has a vision. She and the squad of the 74th Precinct will not only serve their community – they’ll also become part of it.

The first season of East New York averages a 0.43 rating in the 18-49 demographic and 5.26 million viewers in the live+same day ratings (including DVR playback through 3:00 AM). While these numbers don’t include further delayed or streaming viewing, they are a very good indicator of how a show is performing, especially when compared to others on the same channel. There can be other economic factors involved in a show’s fate, but typically the higher-rated series are renewed and the lower-rated ones are cancelled. Find out how East New York stacks up against other CBS TV shows.

Will CBS cancel or renew East New York for season two? Another police procedural series, Blue Bloods, has been very successful for the network, and this new show fits in well with the rest of CBS’ programming. The only negative I can see is that it isn’t owned by CBS or its parent company, so there will be licensing negotiations when it comes time to decide whether to renew the show or not. For now, I think East New York will be renewed. I’ll update this page with breaking developments. Subscribe for free alerts on East New York cancellation or renewal news.

What do you think? Do you hope that the East New York TV show will be renewed for a second season? How would you feel if CBS cancelled this TV series, instead?

This is a terrible show. The main female actress is not a good representation of real law enforcement officers. Smitts is boring and not a good actor. The female with the, I think with a big space between her front teeth, is a stupid part of the show. Living in the hood and being white doesn’t fit. Should not be renewed.