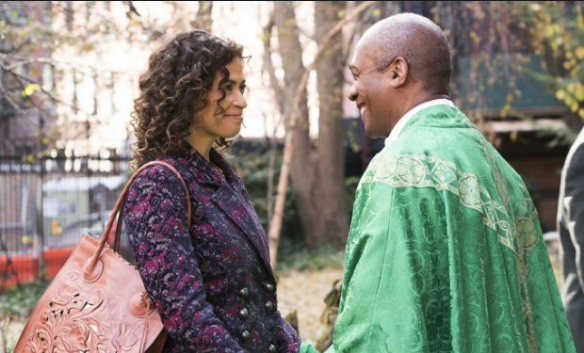 Get ready to see a lot more from Trish. Deadline reports Erica Gimpel has been promoted to series regular for season two of God Friended Me on CBS.

Gimpel plays Trish on the drama series, which centers on Miles (Brandon Micheal Hall), a podcaster whose life is turned upside down when he receives a friend request on social media from a user named “God.” The cast also includes Violett Beane, Suraj Sharma, Javicia Leslie, and Joe Morton.

Season two of God Friended Me is slated to debut on CBS during the 2019-20 season.

We really enjoy the show and look forward to the next season.

I love this show….it makes me smile……and finish my evening with a positive tv experience…no blood or guts..profanity! Thank you!

I definitely will watch live this show. So glad it got picked for second season.

with an industry like this that likes to mock God so much I find it strange this show exist. Who knows what they might or have done. These days you get arrested for speaking on the saying God is love and there for you etc. the entertainment industry and media only pushes Love Is Love they are against God is love because they want us to love everything people do and accept everything when that’s not how it is you can love people but not love what they do

Love Is Love is such a dumb expression anyways.what they mean is any kind of love whether appropriate or inappropriate is okay. That guy was followed by people in the lgbtq….community which I hope doesn’t reflect them all. I saw a lesbian shunned by that same “communuty” for being against abortion…yet so many celebs are for it or at least say they are. this should show people that these groups/communities LGBT feminist equality etc used as weapons to attack anyone opinion does not line up with there’s where they’re all part of their group or not they turn on them… Read more »

It was good but being a long a long season show they did drag it out a little.

I would like to see a wrap within 10 episodes of season 2 to close it out before it peters out.

yes it is a very special and hopeful program

I love this series! And so glad that gal will become a regular. She is a fine actress and I enjoy her character very much.