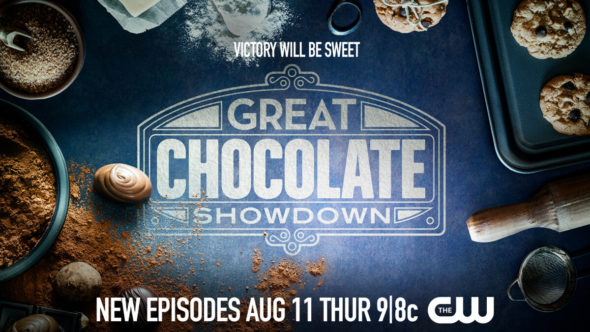 A cooking competition series, the Great Chocolate Showdown TV show is judged by Steven Hodge, Anna Olson, and Cynthia Stroud. An ooey-gooey, decadent dessert series, this program features 10 home bakers going head-to-head in the indulgent world of chocolate. They’re vying for the grand prize in a range of creative chocolate-based challenges. ITo avoid elimination, the chocaholic dessert-makers must dazzle the panel of world-renowned chocolatiers and food expert judges with their delicious, inventive creations. In the end, three bakers take on the biggest chocolate challenge of their lives, but only one is crowned “Great Chocolate Showdown Champion” and wins the grand prize of $50,000.

For comparisons: Season one of Great Chocolate Showdown on The CW averaged a 0.06 rating in the 18-49 demographic and 445,000 viewers in the live+same day ratings.

What do you think? Do you like the Great Chocolate Showdown TV series on The CW? Should it be cancelled or renewed for a third season?