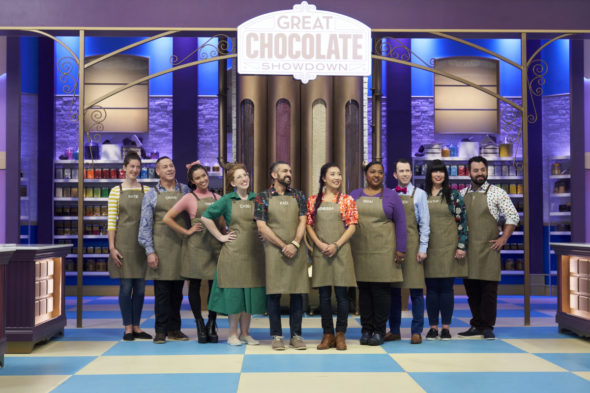 Can this series hit a sweet spot in the ratings for the network? Has the Great Chocolate Showdown TV show been cancelled or renewed for a second season on The CW? The television vulture is watching all the latest cancellation and renewal news, so this page is the place to track the status of Great Chocolate Showdown, season two. Bookmark it, or subscribe for the latest updates. Remember, the television vulture is watching your shows. Are you?

Airing on The CW television network, the Great Chocolate Showdown TV show is judged by Steven Hodge, Anna Olson, and Cynthia Stroud. An ooey-gooey, decadent dessert competition series, this program features 10 home bakers going head-to-head in the indulgent world of chocolate. They’re vying for the grand prize in a range of creative chocolate-based challenges. In order to avoid elimination, the chocaholic dessert-makers must dazzle the panel of world-renowned chocolatiers and food expert judges with their delicious, inventive creations. In the end, three bakers take on the biggest chocolate challenge of their lives, but only one is crowned “Great Chocolate Showdown Champion” and wins the $50,000 grand prize.

The first season of Great Chocolate Showdown averaged a 0.06 rating in the 18-49 demographic and 445,000 viewers in the live+same day ratings (including DVR playback through 3:00 AM). While these numbers don’t include further delayed or streaming viewing, they are a very good indicator of how a show is performing, especially when compared to others on the same channel. There can be other economic factors involved in a show’s fate, but typically the higher-rated series are renewed and the lower-rated ones are cancelled. Find out how Great Chocolate Showdown stacks up against other CW TV shows.

Will The CW cancel or renew Great Chocolate Showdown for season two? The series drew comparable ratings to the network’s other Saturday night shows and the show’s already been renewed for a second season in Canada. I think there’s a very good chance The CW will air season two. I’ll update this page with breaking developments. Subscribe for free alerts on Great Chocolate Showdown cancellation or renewal news.

What do you think? Do you hope that the Great Chocolate Showdown TV show will return for a second season? How would you feel if the series were cancelled on The CW?