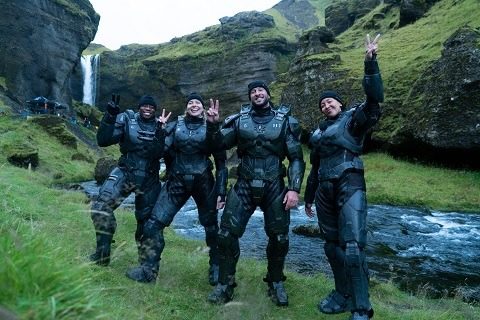 Halo is gearing up for its return. Production has begun on season two of the action series which is based on the popular video game series. Pablo Schreiber, Natascha McElhone, Jen Taylor, Bokeem Woodbine, Shabana Azmi, Natasha Culzac, Olive Gray, Yerin Ha, Bentley Kalu, Kate Kennedy, Charlie Murphy, Danny Sapani, Fiona O’Shaughnessy, and Tylan Bailey star in the Paramount+ show which was renewed for a second season ahead of its premiere in March. Joseph Morgan and Cristina Rodlo have joined the cast.

Paramount+ today announced that the highly anticipated second season of the hit original series HALO. Halo has begun production in Iceland, with additional filming to take place in Budapest, Hungary, later this year. Additionally, it was announced that Joseph Morgan (“Vampire Diaries,” “The Originals”) and Cristina Rodlo (“No One Gets Out of Here Alive,” “The Homeless World Cup”) will join as new series regulars, while cast members Fiona O’Shaughnessy (Laera) and Tylan Bailey (Kessler) return as series regulars for season two.

Morgan joins the series as James Ackerson, a formidable intelligence operative who has spent his career climbing the ranks of the UNSC’s secretive Office of Naval Intelligence. Rodlo is Talia Perez, a corporal specializing in linguistics for a UNSC Marine Corp communications unit and a relatively new recruit who has yet to see any real combat.

Returning from season one, Laera (O’Shaughnessy) is Soren’s confidant, wife and partner in crime. Soren and Laera’s son, Kessler (Bailey), has had a relatively peaceful, if unusual, childhood growing up on the Rubble.

Led by showrunner and executive producer David Wiener (“Brave New World”), the series takes place in the universe that first debuted in 2001 with the launch of Xbox(R)’s first “Halo” game. Dramatizing an epic 26th-century conflict between humanity and an alien threat known as the Covenant, HALO the series weaves deeply drawn personal stories with action, adventure and a richly imagined vision of the future.

HALO is produced by SHOWTIME(R) in association with 343 Industries and Amblin Television. The second season of HALO is executive produced by David Wiener, alongside Steven Spielberg, Darryl Frank and Justin Falvey for Amblin Television. Kiki Wolfkill, Frank O’Connor and Bonnie Ross serve as executive producers for 343 Industries, with Otto Bathurst and Toby Leslie for One Big Picture. The series is distributed internationally by Paramount Global Content Distribution.

A premiere date for Halo season two will be announced later.

What do you think? Are you a fan of the games? Are you excited about the second season of Halo on Paramount+?