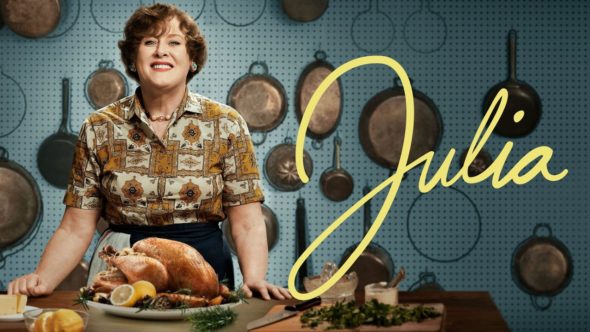 Julia is returning for a second season on HBO Max. The streaming service has announced the renewal of the series loosely based on the life of legendary TV host, author, and chef Julia Child. Starring Sarah Lancashire, David Hyde Pierce, Bebe Neuwirth, Brittany Bradford, Fran Kranz, and Fiona Glascot, the series premiered on March 31st. The first season finale was released today.

“HBO Max has renewed the comedy series JULIA for a second season. The series, which debuted March 31 on HBO Max, concludes its first season on May 5.

Logline: JULIA is inspired by Julia Child’s extraordinary life and her long-running television series, “The French Chef,” which pioneered the modern cooking show. Through Julia’s life and her singular joie de vivre, the series explores a pivotal time in American history – the emergence of public television as a new social institution, feminism and the women’s movement, the nature of celebrity and America’s cultural evolution. At its heart, the series is a portrait of a loving marriage with a shifting power dynamic.

Called “breathtaking” by TV Insider, “wonderful” and “emotionally fulfilling” by NPR, with Paste highlighting Lancashire’s performance as “transformative” and IndieWire noting the actors are “all at the top of their game.”

Chris Keyser and Daniel Goldfarb, executive producers, quote: “Julia Child tends to make people happy. In a bleak world, she is a welcome balm. Making this show has done the same for us. Working with our cast – with Sarah and David – our production team, writers, directors and editors, who have become our friends, makes us happy. In the language of Julia, it feeds our souls. The genuine love and care that HBO Max has shown for our show has been overwhelming. They allowed us to tell the simple story of a group of remarkable, oddball, passionate people, who joyfully live their lives to the fullest. That we get to keep them alive for another season makes us the happiest of all, and we are already hard at work.”

Sarah Aubrey, Head of Original Content, HBO Max quote: “Through her masterful performance, Sarah Lancashire welcomed us into the life of Julia Child, a trailblazer who, among her many accomplishments, redefined the possibilities of public television and, in turn, brought French cuisine and culture into American living rooms. We are grateful to our creative team, led by Chris Keyser and Daniel Goldfarb, and talented cast who entranced us all with an endless helping of warmth and charm. JULIA is the perfect show for this moment and we look forward to serving more in season two.”

What do you think? Are you excited to see a second season of Julia on HBO Max?

I loved the series Julia 2021. I’m so looking forward to season 2. I remember watching Julia Child in colour TV with my mum . Most likely re runs but it prompted me to watch Julia. Can’t wait for season 2. Love all the cast.

Such a show. It makes me smile and gives me joy. I am so tickled that we will be able to have another season of fun with Julia.

Surprisingly appealing and awfully adorable at times thanks to masterful performances from the cast.

While its mostly fiction loosely based on what seem to be a vague outline of Mrs Child actual life, the performances are uniformly excellent and the show is highly engaging + entertaining. Looking forward to watching more!