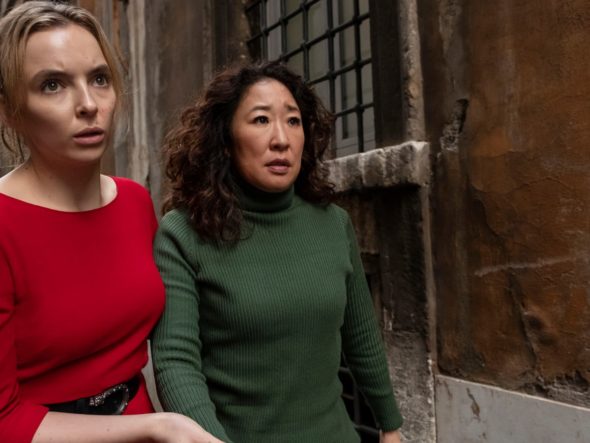 Killing Eve has a premiere date for its fourth and final season. BBC America has released a teaser for the upcoming season of eight episodes which will debut in February.

Starring Sandra Oh, Jodie Comer, Fiona Shaw, Kim Bodnia, Sean Delaney, Owen McDonnell, Dame Harriet Walter, Danny Sapani, Gemma Whelan, Camille Cottin, Steve Pemberton, Raj Bajaj, Turlough Convery, Pedja Bjelac, and Evgenia Dodina, the spy thriller follows a spy (Oh) and an assassin (Comer) who are obsessed with each other. Season four will find the women making their way back to each other, but the road will not be an easy one.

“AMC Networks today revealed the premiere date and first-look photos for the fourth and final season of the irresistible cultural phenomenon and award-winning drama series, Killing Eve. The must-watch conclusion to this epic journey will debut with two back-to-back episodes on Sunday, February 27 at 8:00pm ET/PT on BBC AMERICA. Episodes will also debut weekly on AMC beginning Monday, February 28 at 9:00 p.m. ET/PT, and the season will stream one week early on AMC+, beginning February 20.

After the emotional climax of Season Three, Eve (Golden Globe(R) winner Sandra Oh), Villanelle (Emmy(R) Award winner Jodie Comer) and Carolyn (BAFTA winner Fiona Shaw) are in very different places. Following Eve and Villanelle’s exchange on the bridge, Eve is on a revenge mission, while Villanelle has found a brand-new community in an attempt to prove she’s not a “monster.” Having killed Paul, Carolyn goes to extraordinary lengths to continue to chase down The Twelve and the person that ordered Kenny’s hit. This season follows our extraordinary women, each driven by passion, revenge and obsession, building towards a messy, nuanced and totally glorious series finale.

Killing Eve is produced by Sid Gentle Films Ltd. for BBC AMERICA. The series is financed and distributed by Endeavor Content.”

Check out a teaser for Killing Eve season four below.

What do you think? Are you planning to watch Killing Eve on BBC America? Will you be sad to see the series end after four seasons or, will this be a good time to end it?