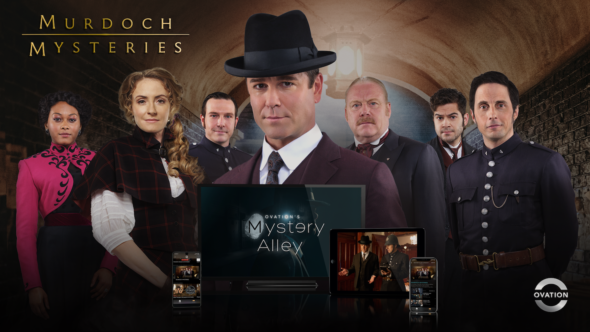 Murdoch Mysteries has a premiere date. Season 15 will arrive in the United States in February, and it is the show’s longest season ever with 24 episodes. Starring Yannick Bisson, Hélène Joy, Thomas Craig, Jonny Harris, Lachlan Murdoch, Shanice Banton, Daniel Maslany, Arwen Humphreys, and Siobhan Murphy, the period drama series follows a detective in Toronto as he solves cases at the turn of the century.

Ovation revealed more about the upcoming series in a press release.

“Ovation TV, America’s only arts network, announces the return of its successful detective series Murdoch Mysteries with a record fifteenth season, coming off the heels of season fourteen, the series’ highest-rated season on the network. As the internationally acclaimed series returns to Mystery Alley, the network’s Saturday night linear destination, audiences will continue to experience compelling mysteries with unique turn-of-the-century historic references that resonate with current and contemporary social issues. The fifteenth season will be the series’ longest to date with a total of twenty-four episodes, including two episodes directed by series star Yannick Bisson and one episode written by Maureen Jennings, author of the novels on which the TV series is based. Ovation TV presents the exclusive U.S. premiere of Murdoch Mysteries season 15 on Saturday, February 26th at 7pm ET.

Need to catch up on the series before the February 26th premiere? Past seasons of the juggernaut series are available to binge for free on Ovation TV’s Mystery Alley, a curated content offering currently available as a FAST channel on Plex, DistroTV, and Freebie.tv, and through the Ovation NOW app on Roku, iOS, Apple TV, Android. Mystery Alley is a free ad-supported viewing experience that provides Murdoch fans with countless hours of the series to relive.

For fans craving more Murdoch Mysteries content, Ovation TV will release a series of custom interstitials featuring interviews of the cast and writers getting candid about the evolution of the show over the years. Viewers are taken behind the curtain as the writers provide some tried and true tips in how to craft a masterful mystery and how, despite a 24-episode season, they never seem to run out of ideas for murders and fun historical cameo appearances. The show’s stars also hint at some exciting bombshells this season that will surely delight fans. On air, each premiere episode will feature a behind-the-scenes short-form vignette, with extended versions available on Ovation NOW.

Season fifteen opens with Detective Murdoch (Yannick Bisson) as he journeys to Montreal, seeking to find and protect his son, Harry (Etienne Kellici), from the Black Hand gang. Murdoch’s wife, Dr. Julia Ogden (Hélène Joy), assists him with a challenging case at a women’s reformatory by going undercover, but back at the hospital she faces opposition and censure when she tries to assist a woman in grave pain, causing potentially irreparable damage to her career. Elsewhere, Brackenreid’s (Thomas Craig) son has sprung loose from jail and is on the run after a murder at the Kingston Pen; Crabtree (Jonny Harris) finds himself in a compromised situation as he tries to save Effie (Clare McConnell) from her kidnappers; Violet Hart (Shanice Banton) explores an interesting way to deal with her not-so-new husband; and Watts (Daniel Maslany), still embroiled in an illicit affair, encounters a brand-new murder mystery.

Other cases this season include a death threat against Dr. Sigmund Freud when he and his colleagues, including Carl Jung, visit Toronto for a lecture. At Halloween, a violent clown is tormenting young lovers and the shooting of a political cartoonist at an awards ceremony appears to have ties to journalistic jealousy and new development projects in the city of Toronto. Later in the season, the murder of a stage manager with compromising film images of actress Mary Pickford could complicate her path to New York and stardom. And when Murdoch, Ogden, Harry, Crabtree, and a team of ragtag players attend an out-of-town basketball tournament, Dr. James Naismith, the inventor of basketball, is implicated in the murder of the mayor.

What do you think? Are you excited about the return of Murdoch Mysteries?

I for oñe really like Murdock Mysteries, I have followed Yannick since his stint in the Sue Thomas FBI series and I also watched the 5 episodes Aurora Teagarten mysteries on Hallmark channel. Through that series I found Murdock Mysteries. What I really enjoy is the way the writers have incorporated important historical information about so many different project our children are no longer being taught. It also gives out the singular history of individuals who played much bigger parts than in just in the USA. I thank you for this program and can’t wait to see season 15 and… Read more »

The best series on television that is written and developed with all of the entertainment value folks love! Especially since it is very clever and appropriate for every single member of the family! The diversity is amazing and the historical references are so much fun!

Can’t wait for the new series to begin, a truly good mystery show with twists and turns.

Murdoch is the best show on television, hands down. I ❤️ it

Glad for the return of Murdoch and crew. I enjoy the dabbling of famous period peoples and technologies. .I may have missed the beginning seasons but Murdoch has a son?

I love Murdoch Mysteries. It’s the best tv show since X-files.I’m totally hooked. I can’t wait for the next episode each week. I absolutely love the cast.

We can hardly wait!! We’ve missed the whole gang!

I have hulu, Disney plus… PLEASE were can I find ALL of episodes I have watched one through 13 but I cannot find anywhere to go for the other ones, PLEASE HELP ME!!!

Best and most exciting TV news I’ve heard since annoucements re: Season 14! Bring it ON!

I am so excited to see Murdoch will be back!

When is it going to be shown in England