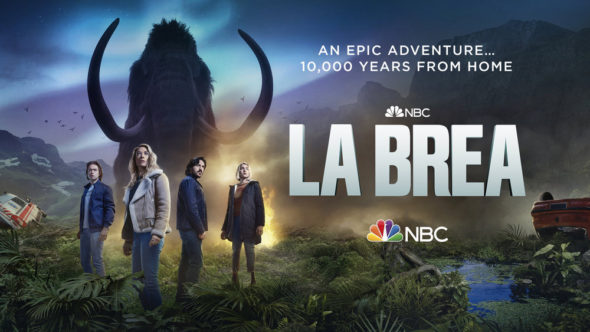 Sci-fi shows on the broadcast networks are often cancelled after one season. While they can attract a passionate audience, the numbers are often too small for the series to survive. A few shows, like La Brea, make it to a second season but are then dropped. Will La Brea buck the trend and be renewed for season three on NBC? Stay tuned.

An NBC disaster drama, the La Brea TV show stars Natalie Zea, Eoin Macken, Jon Seda, Nicholas Gonzalez, Chiké Okonkwo, Zyra Gorecki, Jack Martin, Veronica St. Clair, Rohan Mirchandaney, Lily Santiago, Josh McKenzie, Tonantzin Carmelo, and Michelle Vergara Moore. The story begins as a massive sinkhole opens up in the middle of Los Angeles, swallowing cars and buildings and separating the Harris family between two worlds. Mom Eve (Zea), teenage son Josh (Martin), and others fall into an unexplainable primeval land. On the surface, searching for answers, there’s teen daughter Izzy (Gorecki) and Gavin (Macken), her father who has a troubled past, as well as visions. In season two, the Harris family remains separated as Eve reels from her son Josh having mistakenly gone through a portal to 1988. Meanwhile, her estranged husband, Gavin, and their daughter, Izzy, have landed in prehistoric Seattle and must brave the elements and animals to make their way to Los Angeles.

11/16 update: You can see the latest night’s ratings in context.

For comparisons: Season one of La Brea on NBC averaged a 0.58 rating in the 18-49 demographic and 3.90 million viewers in the live+same day ratings.

What do you think? Do you like the La Brea TV series on NBC? Should it be cancelled or renewed for a third season?

Most underrated show on regular TV

I’ll never forgive NBC for canceling Revolution years ago. SciFi shows have a history of getting canceled by NBC. Praying this one keeps going for a few more seasons.

It’s starting to go stale with Levi and Eve let it go already!

I really enjoy LA Brea. Finally a show where you have to think a little not just sit there and get spoon fed crap, cussing, set and gratuitous violence. Thank you

La Brea continues to be the funniest show on TV.

Frank? No, I’m Julia, your daughter.
Henry? No, I’m George, your second cousin on your mother’s side.
Penelope? No, I’m Irving, your great-grandfather.
Sam? No, I’m Graloon, from the planet Mngokjbgjh.