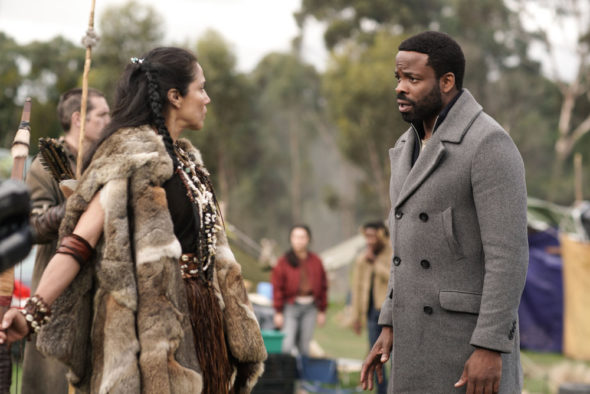 NBC is hoping viewers will give the second season of the La Brea TV show their time. As we all know, Nielsen ratings typically play a big role in determining whether a TV show like La Brea is cancelled or renewed for season three. Unfortunately, most of us do not live in Nielsen households. Because many viewers feel frustrated when their viewing habits and opinions aren’t considered, we invite you to rate all of the second season episodes of La Brea here.

An NBC disaster drama, the La Brea TV show stars Natalie Zea, Eoin Macken, Jon Seda, Nicholas Gonzalez, Chiké Okonkwo, Zyra Gorecki, Jack Martin, Veronica St. Clair, Rohan Mirchandaney, Lily Santiago, Josh McKenzie, Tonantzin Carmelo, and Michelle Vergara Moore. The story begins as a massive sinkhole opens up in the middle of Los Angeles, swallowing cars and buildings and separating the Harris family between two worlds. Mom Eve (Zea), teenage son Josh (Martin), and others fall into an unexplainable primeval land. On the surface, searching for answers, there’s teen daughter Izzy (Gorecki) and Gavin (Macken), her father who has a troubled past, as well as visions. In season two, the Harris family remains separated as Eve reels from her son Josh having mistakenly gone through a portal to 1988. Meanwhile, her estranged husband, Gavin, and their daughter, Izzy, have landed in prehistoric Seattle and must brave the elements and animals to make their way to Los Angeles.

What do you think? Which season two episodes of the La Brea TV series do you rate as wonderful, terrible, or somewhere between? Do you think that La Brea should be cancelled or renewed for a third season on NBC?

OMG, the new episode was hilarious! What started out really interesting & new turned out to be pretty comical! We took it off our must watch list.