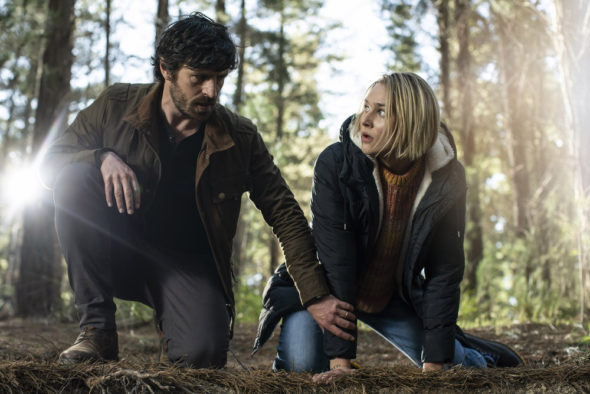 The Harris family is going to need more time. Has the La Brea TV show been cancelled or renewed for a third season on NBC? The television vulture is watching all the latest cancellation and renewal news, so this page is the place to track the status of La Brea, season three. Bookmark it, or subscribe for the latest updates. Remember, the television vulture is watching your shows. Are you?

Airing on the NBC television network, the La Brea TV show stars Natalie Zea, Eoin Macken, Jon Seda, Nicholas Gonzalez, Chiké Okonkwo, Zyra Gorecki, Jack Martin, Veronica St. Clair, Rohan Mirchandaney, Lily Santiago, Josh McKenzie, Tonantzin Carmelo, and Michelle Vergara Moore. The story begins as a massive sinkhole opens up in the middle of Los Angeles, swallowing cars and buildings and separating the Harris family between two worlds. Mom Eve (Zea), teenage son Josh (Martin), and others fall into an unexplainable primeval land. On the surface, searching for answers, there’s teen daughter Izzy (Gorecki) and Gavin (Macken), her father who has a troubled past, as well as visions. In season two, the Harris family remains separated as Eve reels from her son Josh having mistakenly gone through a portal to 1988. Meanwhile, her estranged husband, Gavin, and their daughter, Izzy, have landed in prehistoric Seattle and must brave the elements and animals to make their way to Los Angeles.

The second season of La Brea averages a 0.39 rating in the 18-49 demographic and 3.58 million viewers in the live+same day ratings (includes all DVR playback through 3:00 AM). Compared to season one, that’s down by 33% in the demo and down by 28% in viewership. While these numbers don’t include further delayed or streaming viewing, they are a very good indicator of how a show is performing, especially when compared to others on the same channel. Though other economic factors are involved, the higher-rated shows usually get renewed, and the lower-rated ones get cancelled. Find out how La Brea stacks up against other NBC TV shows.

Will NBC cancel or renew La Brea for season three? The series did okay in its first season in the traditional ratings and often picked up more than 50% more viewers when seven-day delayed viewing is factored in. La Brea has a passionate audience and, these days, I think that’s rare for a broadcast network show. It’s produced by NBCUniversal’s production company, which means NBC’s parent company also profits from the show via streaming and international sales. That’s become a very important factor as network ad revenue has dropped. So, I think there’s a good chance that La Brea will be renewed. I’ll update this page with breaking developments. Subscribe for free alerts on La Brea cancellation or renewal news.

What do you think? Do you hope that the La Brea TV show will be renewed for a third season? How would you feel if NBC cancelled this TV series, instead?

How can you expect a show to go well with the schedule so sporadic? You are looking forward to seeing the show and it isn’t on for two weeks. Then, you find out it was the middle of November the next episode isn’t until the end of January! Really? How about keeping to the once a week schedule?

La brea is a bit of a disappointment because as a family we were expecting more of the animals that lived in that time frame. 5 species really needs to be added to, that’s what my family is wanting to see in the show.

We need a season three. We have been watching all this time for a purpose. But, if you cancel then we will all be confused.

I think they should do La Brea Season 3 for sure continue it good show been watching it since it began. Hope it doesn’t cancel and many more seasons to come I hope please.

I love this show ……its different…..not the same old hospital / cop show crap….I look forward to many more seasons

We hope La Brea is renewed for Season three!

Although I enjoy Scifi and fantasy, and even with a far-out theme, each week gets worse in acting and delivery of a poorly written script. Viewers like to know how a series progresses and finally ends despite the pain of watching.

This show is all over the place and is really hard to follow, who is who and where they are. Not sure if I would watch another season.

I don’t agree. It isn’t all over the place at all. I don’t know why you would think that . The problem is the way it’s scheduled. They say every week there will be an episode then it isn’t on. Now they say the next one won’t be until end January! That’s a bunch of baloney.