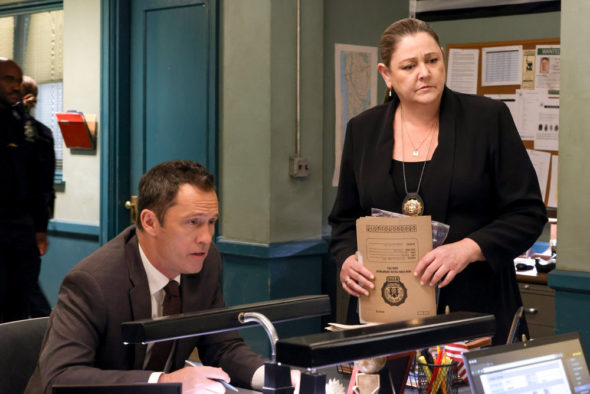 DA Jack McCoy is as tough as ever. Has the Law & Order TV show been cancelled or renewed for a 23rd season on NBC? The television vulture is watching all the latest cancellation and renewal news, so this page is the place to track the status of Law & Order, season 23. Bookmark it, or subscribe for the latest updates. Remember, the television vulture is watching your shows. Are you?

The 22nd season of Law & Order averages a 0.60 rating in the 18-49 demographic and 4.690 million viewers. Compared to season 21, that’s up by 22% in the demo and up by 9% in viewership in the live+same day ratings (includes DVR playback through 3:00 AM). While these numbers don’t include further delayed or streaming viewing, they are a very good indicator of how a show is performing, especially when compared to others on the same channel. There can be other economic factors involved in a show’s fate, but typically the higher-rated series are renewed and the lower-rated ones are cancelled. Find out how Law & Order stacks up against other NBC TV shows.

Will NBC cancel or renew Law & Order for season 23? This show was cancelled back in 2010, only to be revived 11 years later. The network has built a whole night’s schedule around the Law & Order franchise, and all of those shows perform well in the ratings. I’m sure this series will be renewed for a 23rd season and beyond. I’ll update this page with breaking developments. Subscribe for free alerts on Law & Order cancellation or renewal news.

What do you think? Do you hope that the Law & Order TV show will be renewed for a 23rd season? How would you feel if NBC cancelled this TV series, instead?