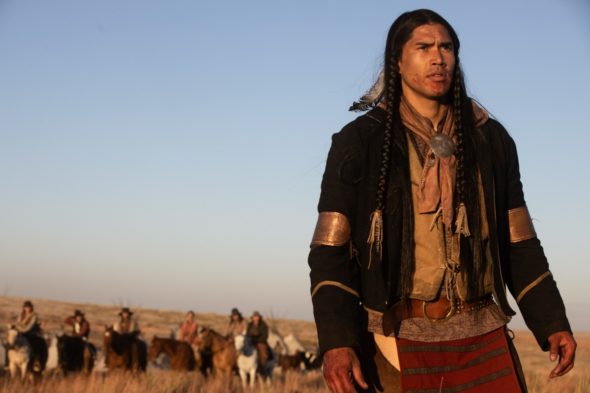 La Brea is adding to its cast for season two. Martin Sensmeier (1883, above) is joining the NBC series in a recurring role.

Debuting on the peacock network last fall, La Brea revolves around a giant sinkhole that opens in Los Angeles, near the La Brea Tar Pits. Hundreds of people, vehicles and buildings drop into the hole, and those that survive find themselves in primeval land. They must work together to make it while people in our world try to help them. The cast of the series includes Natalie Zea, Eoin Macken, Jon Seda, Nicholas Gonzalez, Chiké Okonkwo, Zyra Gorecki, Jack Martin, Veronica St. Clair, Rohan Mirchandaney, Lily Santiago, Josh McKenzie, Tonantzin Carmelo, and Michelle Vergara Moore.

Deadline revealed the following about Sensmeier’s role in the NBC series:

He will portray Taamet, the leader of The Exiles, a dangerous group of people living in 10,000 BC. Taamet will become a feared adversary of the La Brea Survivors as Season Two unfolds. His appearance is in the October 4 episode.

La Brea returns with its second season on September 27th.

What do you think? Are you excited about next week’s return of La Brea on NBC?

This show is so absurd it is like watching a train wreck. You just have to see what happens. Hard to consider it a drama but some character arcs are touching.

Me too! Love love love it !

Cannot wait to see how the story continues now that some of the groups are separated. What’s in the silver tower?

Very excited to gave it coming back.