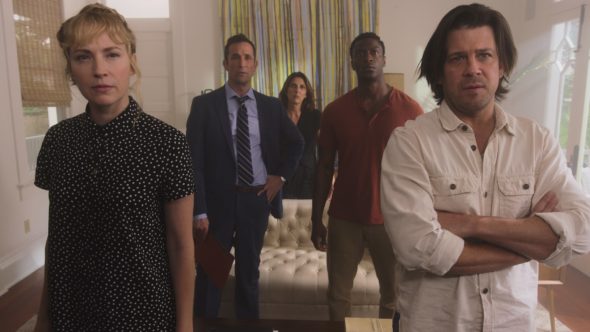 Get ready for the return of the gang from Leverage with Noah Wyle now in charge. Leverage: Redemption will premiere soon, and IMDb TV has released a trailer for the revival. Aldis Hodge, Beth Riesgraf, Gina Bellman, and Christian Kane are all returning from the original TNT drama series.

IMDb TV revealed more about the Leverage: Redemption series in a press release.

“In this new iteration and new world, the Leverage crew have watched as the rich and powerful continue to take what they want without consequence. Grifter Sophie Devereaux (Gina Bellman), thief Parker (Beth Riesgraf), hitter Eliot Spencer (Christian Kane), and hacker Alec Hardison (Aldis Hodge) have watched the world change over the last eight years. Since their last job, it’s become easier-and sometimes legal-for the rich to become richer and the powerful to squash anyone who gets in their way.

To address the changes in the world around them, the team finds new blood in Harry Wilson (Noah Wyle), a corporate lawyer who is looking for redemption after realizing he’d been sitting on the wrong side of the table for his entire career, and Breanna Casey (Aleyse Shannon), Hardison’s foster sister who has a knack for computers, robotics, and getting into trouble.”

Leverage: Redemption premieres on July 9th. Check out the teaser trailer for the return of the series below.

What do you think? Are you excited about the return of the team in Leverage: Redemption on IMDb TV?

Look forward revival new season premiere so good and love it. Never missed any episodes of it.

I really liked the show and would love to see it return.

I loved this show before and hope it stays on for the next 10 seasons. Hopefully it is not cut short!!!!

Can’t wait to watch it! It’s a great tv show! Love it.

Going be advertisement on amazon prime when it comes out on streaming how ridiculous why they doing this shows watch no interruptions.

We can’t wait…love all of the former stars in their amazing roles and Noah is just icing on the cake.

Noah Wyle is on the show SAD!!

Can’t wait. Hope it’s as good as the original.

I can’t wait one of my favorite shows revival is the best spy been off couple years ago didn’t like ended series stupid idea. Look forward July 9 on Amazon Prime.