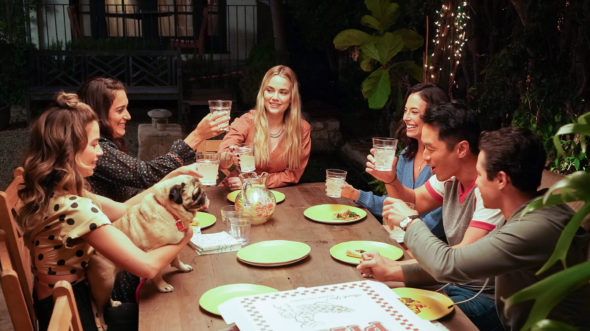 This show’s fate may already be decided. Has the Maggie TV show been cancelled or renewed for a second season on Hulu? The television vulture is watching all the latest cancellation and renewal news, so this page is the place to track the status of Maggie, season two. Bookmark it, or subscribe for the latest updates. Remember, the television vulture is watching your shows. Are you?

Streaming on the Hulu subscription service, the Maggie TV show was created by Justin Adler and Maggie Mull. The comedy stars Rebecca Rittenhouse, David Del Rio, Nichole Sakura, Leonardo Nam, Angelique Cabral, Ray Ford, Chloe Bridges, Kerri Kenney, and Chris Elliott. The story revolves around a young woman by the name of Maggie (Rittenhouse). Life can be tough enough but things get even more complicated when you’re a psychic like Maggie is. Her gift allows her to see into the future of her friends, parents, clients, and even random people on the street. But, when she begins to see glimpses of her own destiny after meeting an unexpected stranger, her romantic life suddenly gets a lot more complicated. Can you let yourself fall in love when you think you know how it ends? Truth be told, she probably should have seen this coming.

Unless they decide to publicize viewership, it is difficult to predict whether Hulu will cancel or renew Maggie for season two. This show was ordered to series by ABC back in May 2021 and was expected to air on the alphabet network during the 2021-22 broadcast season. By January of this year, the comedy had been moved to Hulu, supposedly because ABC didn’t have room for it on the schedule. Hulu finally got around to launching the series 14 months after it was ordered. The show clearly hasn’t been a priority for either outlet and I suspect the cast’s contact options have now expired. I’d be surprised if this show was renewed. I’ll keep my ears open and an eye out for news, and will update this page with breaking developments. Subscribe for free alerts on Maggie cancellation or renewal news.

What do you think? Do you hope that the Maggie TV show will be renewed for a second season? How would you feel if Hulu cancelled this comedy TV series, instead?

Insider here – Maggie is being renewed.

I just binged “Maggie.” I enjoyed it & definitely want to see what happens next!
Season 2, YES PLEASE!! Give it a chance to be all it can be! Hulu cancels way too many shows after 1 season. Honestly it’s annoying! Give “Maggie” another season or 2. I’m tired of FUN sitcoms that end after 1 season on Hulu.

I absolutely hope so.

Really? Hope so but not sure how you know that because the EP does not have that info.