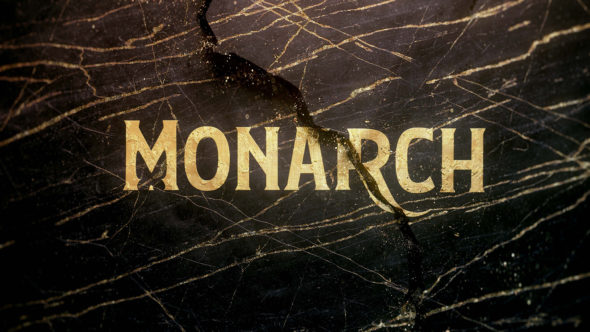 FOX needs new successful drama series. Last season, the renewals of some of the network’s highest-rated drama series, came down to the wire. The network doesn’t own them, so there’s less profit. Monarch, however, is fully owned by FOX Entertainment, so even if the ratings aren’t the best, this show could have a financial advantage when renewal time comes around.  Will Monarch be cancelled or renewed for season two? Stay tuned.

A multi-generational musical drama series, the Monarch TV show stars Susan Sarandon, Trace Adkins, Anna Friel, Joshua Sasse, Beth Ditto, Meagan Holder, Inigo Pascual, Martha Higareda, and Emma Milani. The story revolves around the Romans, America’s leading family of country music. The clan is headed by the tough-as-nails Queen of Country Music, Dottie Cantrell Roman (Sarandon), and her beloved husband, “Texas Truthteller” Albie Roman (Adkins). Dottie and Albie have created a country music dynasty, but the very foundation of their success is a lie. The heir to the crown, Nicolette “Nicky” Roman (Friel), will stop at nothing to protect her family’s legacy while ensuring her own quest for stardom. Middle child Luke Roman (Sasse) is the CEO of the family’s business, Monarch Entertainment. Youngest daughter Gigi Tucker-Roman (Ditto) is very close to her older brother and sister, but in a family of superstars, Gigi has always felt like a bit of an outcast, despite her incredible singing voice. Ace Grayson (Pascual) is a talented and sensitive 18-year-old who was adopted from an orphanage by Nicky and her husband. And just when the Romans’ world couldn’t get more chaotic, enter Catt Phoenix (Higareda), the stunning and unpredictable mother of 17-year-old Ana Phoenix (Milani), a talented, wide-eyed young singer who is trying to get signed to the Roman family’s record label.

What do you think? Do you like the Monarch TV series on FOX? Should it be cancelled or renewed for a second season?

The show sucks !! Not at all what I thought it would be. Horrible actors. Please don’t renew it’s a waste of tv time. They can’t even sing something original

Please reconsider in boost your your account ratings so good new series soap opera musical country singer look forward to seeing it every Tuesday night drama. Enjoy it and love it all episodes of it.

I really enjoyed this show. Love Trace Adkins and Susan Sarandon. Look forward to seeing how all the twisted plots turn out.

Not a bad show, but Fox had the times all messed up. Was suppose to come on at 8 P.M. but was already on when I turned over at 2 minutes before 8 then that episode went off at 8:45 P.M. and repeated so I started watching that episode to see what I missed and it turned out that I had missed the first 11 minutes of the show (so if you tuned in at 9 P.M., you missed 15 minutes of the show.).

It’s because football was on before time it started whenever it was messed up. But completely understand story even got cut off on my DVR didn’t bother me. Look forward to to seeing seeing.

Not totally true. Football was on, but Fox cut their post-game show short and started Monarch at 7:45 instead of 8:00, then did the same for the rebroadcast that followed. Not a good way to introduce a show, though it did get another rebroadcast on Monday following 9-1-1, their highest rated show. Not that it helped – it dropped from a .91 demo to a .21 this week. Don’t think it’s long for this world.