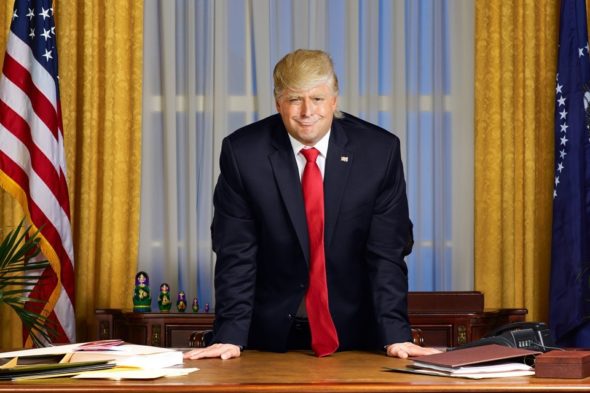 Comedy Central has something huuuge planned next month. Today, the network announced a one-hour President Show special will air in April.

Watch the announcement and read more info below:

NEW YORK, March 14, 2018 -The president has been extremely busy lately hastening the downfall of our republic, but the host of The President Show will still make time to return to Comedy Central for big, hour-long specials. Following the hugest, most successful and best reviewed Christmas special of all time, it was announced today the team from The President Show is back with an all-new hour-long special. Make America Great-A-Thon: A President Show Special will debut on Tuesday, April 3 at 11:00 p.m. ET/PT.

Said the host of Make America Great-A-Thon: A President Show Special, “Since Robert Mueller won’t let me do my show any more (WITCH HUNT!), failing Comedy Central BEGGED me to keep doing specials. And I know how to make money, I have been making money my whole life. Which is why I’ve declared bankruptcy four times.”

“We thought it’d be fun to have the president host a telethon” says Atamanuik. “Taking money from the American people is what Trump does best.”

“What can I say about Donald Trump that hasn’t already been said before… except that Anthony Atamanuik is a genius. A stable, creative genius,” said Kent Alterman, President, Comedy Central.

What do you think? Are you a fan of The President Show? Will you watch the one-hour special?

Trump’s Telethon on The President Show last night was indescribably funny. Today at work I attempted to describe the psychological insight evident throughout the show. I gave up and just urged everyone to WATCH IT! Trump crooning about his love for the porn queen while wearing a red-fringed Elvis shirt. The provocative and moody black and white Japanese Noh theater skit that plunged the depths of Trump’s sociopathic lack of morality. And when the FBI finally collared Trump at the end the cathartic effect it had on my political depression was sensational. BRING BACK THIS SHOW ON A WEEKLY BASIS… Read more »

I love and adore this show. It brings biting humor to a fractured country and it’s funny as hell!

Bring it back! It’s the only thing Making America Great Again I’ve seen.

Bring it back, it’s great

Same type of garbage tv show they did back when George W Bush was in office.