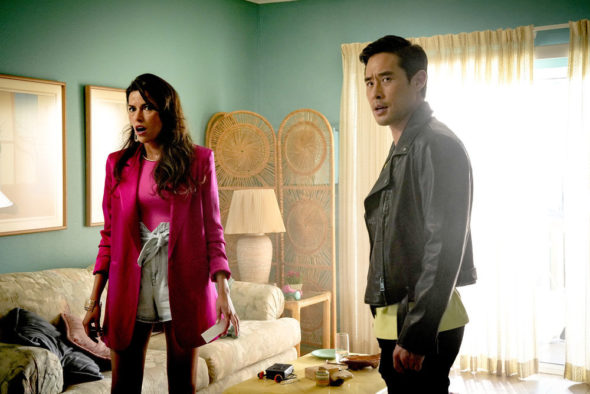 Quantum Leap is the first series of the new season to be given a full season order. NBC has ordered six more episodes of the sequel series which airs on Monday nights. Raymond Lee, Caitlin Bassett, Ernie Hudson, Mason Alexander Park, and Nanrisa Lee star in the series which finds a new team, led by Ben Song (Lee), trying to figure out what happened to time traveler Sam Beckett and the mysteries of the Quantum Leap project.

NBC announced the additional episode order in a press release.

NBC has ordered six additional episodes of its new drama series “Quantum Leap,” bringing its season one total to 18 episodes.

“Quantum Leap” is the #1 NBC current season series on Peacock, and is a Top 5 title on Peacock season-to-date across all genres.

The Wall Street Journal calls the series “a cult classic in a new body” and that is has “a number of welcome nods to the past.” Variety adds “the fun of each episode comes with finding out what imbroglio Ben has zapped into this time and figuring out the details as he does.”

Universal Television, a division of Universal Studio Group, produces in association with I Have an Idea! Entertainment, Belisarius Productions and Quinn’s House Productions.

What do you think? Are you a fan of the Quantum Leap sequel? Do you want a second season of this NBC show?

Please keep Quantum Leap. I was a huge fan of the original and the reboot leaves me with the same existential experience which is a rarity in tv shows. Thank you

Yes, it’s a very good serial and I enjoy it, walking through all those Leaps.
So, please keep the Quantum Leap,” Leaping “through our lives .

I’ll have to go check it out now on Peacock then. I’ve been watching the NBC returning series La Brea. Highly Enjoy!

I think that the writers/producers are doing a great job of keeping Sam and Al relevant (and important) in this sequel. With Don Bellesirio and his ex-wife, Deborah Pratt as part of the executive producers pool, it only adds. Raymond is doing a great job as the new leaper.

Just finished re-watching the whole of the original series. Looking forward to this.

When it comes to it, if the end of the series is not them finding Sam and bringing him home then something is wrong!

There is an interview with Don Belleserio (sp) in which Don says, “Sam can go home at anytime but between leaps he sees other people who need to have their lives put right where they went wrong.” Very poignant imo.

0
0
Reply
Any other name would be frivolous

I am a big fan! I hope to see more “QL” alumni (especially) Scott Bakula.