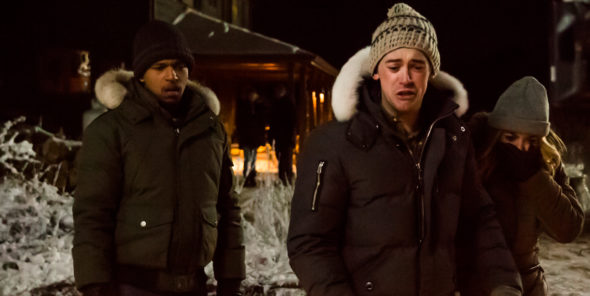 Are there any survivors? Has the Slasher TV show been cancelled or renewed for a third season on Netflix? The television vulture is watching all the latest TV cancellation and renewal news, so this page is the place to track the status of Slasher, season three. Bookmark it, or subscribe for the latest updates. Remember, the television vulture is watching your shows. Are you?

Unless it decides to publicize its viewership, it is hard to predict whether Netflix will cancel or renew Slasher for a third season. The first season of this horror anthology series aired on Chiller in the US and Super Channel in Canada. While both outlets cancelled it after one season, Netflix must have thought it was a good fit for their subscribers, because they picked it up for season two. Although there are no Nielsen ratings to watch, I will update this page with any Slasher cancellation or renewal news, so subscribe for free alerts.

Update: The Slasher TV show has been renewed for a third season.

What do you think? Are you glad that the Slasher TV show has been renewed for a third season? How would you feel if Netflix had cancelled this TV series, instead?

Just because network tv channels cancel a show doesn’t mean there won’t be any further seasons. I mean some TV channels don’t know what’s good for them. I mean take Lucifer for example. Fox cancelled it after 3 seasons which was a shock because it was an awesome show. Then Netflix picked it up and now there’s going to be a season 4 in 2019. I am surprised to say the least that there’s zero chatter about the future of this program. If it’s not declared cancelled I guess we can always hope to expect another season until confirmed otherwise

I sure hope to see many more seasons of Slasher because it’s awesome! For me to say this says a lot because it takes a good thrill to keep me on the edge of mt seat & this series has done exactly that!

Omg I’ve been telling everyone to watch this show!!! I LOVE it

I really hope there’s a season 3.this show rocks.I love it

According to IMDB there is a season 3… it lists season 3 and 5 episodes listed so far but no dates, plots, or casts listed yet