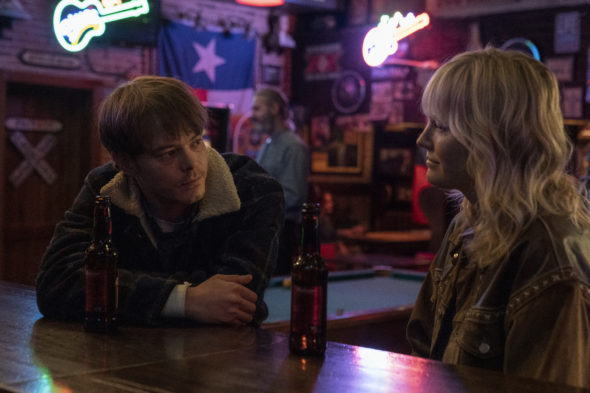 TV show description:
An anthology drama series, the Soulmates TV show is set 15 years into the future and examines the nature of romantic love.

In the future, science has made a discovery that changes the lives of everyone on the planet – a test that unequivocally tells you who your soulmate is. Each of the episodes features a different cast and explores a different story revolving around discovering — or opting not to discover — the results of this new test and the impact of those results on a myriad of relationships.

In one episode, big-hearted Kurt (Heaton) feels lost after the discovery that his soulmate is dead. He finds faith and opportunity in the arms of a church, which helps those whose soulmates have already passed on. Martha (Akerman) has bounced from bad relationship to bad relationship but, is now putting her trust in the test and the same church. Meanwhile, Travis (Anderson) is a heartbroken, suicidal man, who is isolated from his family and wants to be forgiven; and Brother Samson (Mackintosh) is spreading a message of a hopeful future to all his flock, imbuing them with peace and the understanding that they are all worthy of love.

In another episode, Caitlin (Brandt) is a push-over who, after discovering her soulmate, starts to finally stand up for herself. Nathan (Feild) has a dark side and decides to share it when he meets his match, Caitlin. Meanwhile, Doug (Goodman-Hill) is Caitlin’s dependable and dependably unromantic boyfriend.

What do you think? Do you like the Soulmates TV show? Do you think it should be cancelled or renewed for another season?