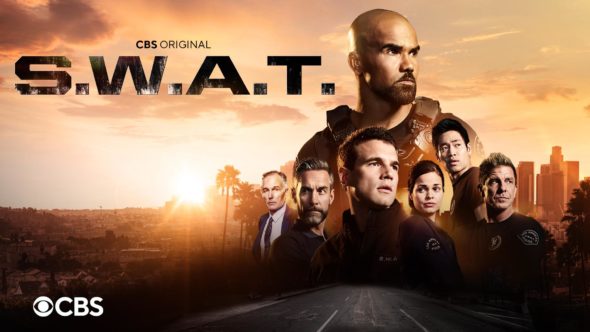 Last season, SWAT escaped being cancelled and ended up being the lowest-rated scripted series on CBS to be renewed. For 2021-22, the network relocated it to Friday nights where expectations can be lower but are still expected to perform. Is this the show’s last chance? Will SWAT be cancelled or renewed for season six? Stay tuned.  *Status Update Below.

5/23 update: You can see the latest night’s ratings in context.

For comparisons: Season four of SWAT on CBS averaged a 0.42 rating in the 18-49 demographic and 3.16 million viewers.

What do you think? Do you like the SWAT TV series on CBS? Should it be cancelled or renewed for a sixth season?

KEEP S W A T DO NOT CANCEL THIS PROGRAM,THE PEOPLE IN LODI AND THORNTON, CALIFORNIA LOVE S W A T and SHEMAR MOORE

Refreshing change to every other opening of the previous seasons.
Absolutely brilliant.
I enjoyed every moment of the first episode.
It defines Hondo’s struggle and his chance to get it out of his system by going all Johnny Rambo.
Cannot wait for the next instalment here in England.
I even got a chance to brush up on my Spanish!

I love SWAT. This season opener had my heart pounding and I can’t wait for this week’s episode. I do hope CBS continues the series for other seasons. Also hoping that Hondo’s character can return as squad leader sometime this season.

I love the series Season 6 come on.

Loved the first episode of the season! It was one of my favorites so far!

Love this series, keep it going

I love this show. Please do NOT cancel it
The times it aires changes a lot and it can be hard to find.

It definitely has my vote, I absolutely love it can’t wait for the next season will be absolutely devastated if they cancel it

I love the Swat series, I watched past season all summer waiting for the new season to start..I hope that it will be renewed for many more. I think moving it to friday night maybe a mistake making it harder to watch, but my family and friends will not miss an episode. It is a very good show and much much better than all the stupid Sitcoms and reality shows like Survivor and Bob ❤ Abishola..

Swat needs to be on a channel that if you miss it you can rewatxh without Hassle and pay. I love show but can’t aways watch it so I try to watch later date.love show

Swat has my vote I love watching Swat loved season 5 . Hondo has always been my favorite Have a season 6 would be great . I wouldn’t want to see it cancelled if this does happen . Swat has and always will have my vote

I love SWAT. No it should not be cancelled. It should keep going. That is a good team and they all work and care about each other.