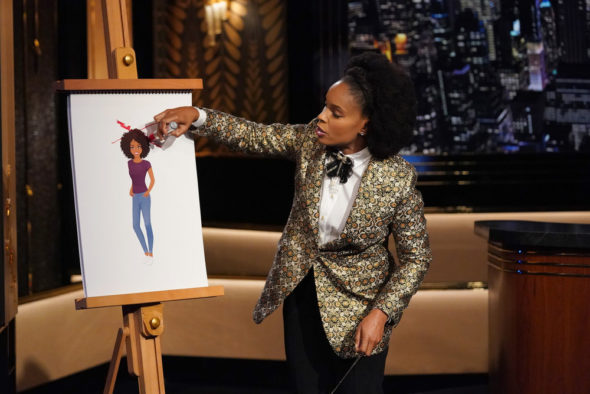 The Amber Ruffin Show is returning for a second season. Peacock has ordered more episodes of the topical late-night series featuring the comedian. The first season’s finale will be released this Friday and season two is set to launch on October 8th.

“Peacock’s Emmy-nominated late-night series THE AMBER RUFFIN SHOW has been renewed for a second season.

“We are thrilled to keep doing what we love for another season,” said host, writer and executive producer Amber Ruffin. “Margaritas for everyone!”

Season one of the critically-acclaimed series – which recently welcomed a live studio audience – will conclude this Friday, September 17. Season two will begin on Friday, October 8, with all-new episodes dropping every Friday.

THE AMBER RUFFIN SHOW showcases Amber’s signature smart and silly take on the week’s news. No matter what’s happening in the world, Amber responds to it with a charming mix of seriousness, nonsense, and bowties. THE AMBER RUFFIN SHOW is a topical late-night show with just the good parts – the comedy.

Recently, Peacock and Back Lot Music released The Amber Ruffin Show “Music From The Original Series.” Over 40 songs from the show are featured including hits songs “Bore Me,” “I Don’t Wish Him Well,” “20 Dollars More,” and “White Supremacists Facing Consequences Fills Me With Joy.” All songs are available now everywhere digital music is sold and streamed.

Emmy and WGA Award nominee Amber Ruffin is also a writer and performer for NBC’s Late Night with Seth Meyers. She was the first African American female to write for a late-night network talk show in the U.S. She wrote and performed on Comedy Central’s Detroiters and was a regular narrator on the cabler’s Drunk History. Ruffin was previously a performer at Boom Chicago in Amsterdam, the iO Theater and the Second City in Chicago. In addition, she was a writer/performer for the 2018 and 2019 Golden Globe Awards and has written for the series A Black Lady Sketch Show. Ruffin is a New York Times bestselling author, along with her sister Lacey Lamar, of “You’ll Never Believe What Happened to Lacey: Crazy Stories of Racism,” published by Grand Central Publishing. She is currently co-writing the Broadway musical “Some Like it Hot,” which will begin performances in 2022. This year, Ruffin was named to the 2021 TIME100 Next List, TIME’s list of the next 100 most influential people in the world.

What do you think? Are you a fan of The Amber Ruffin Show? Do you plan to watch season two when it arrives next month?