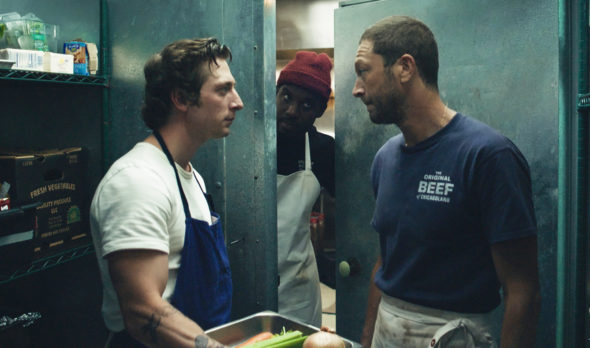 Carmy will be back in the kitchen. FX on Hulu has renewed The Bear TV series for a second season which will premiere in 2023. The first season of eight episodes was released on June 23rd.

A single-camera comedy series, The Bear TV show stars Jeremy Allen White, Ebon Moss-Bachrach, Ayo Edebiri, Lionel Boyce, Abby Elliott, Liza Colón-Zayas, Edwin Gibson, and Matty Matheson. The story follows Carmen “Carmy” Berzatto (White), a young chef from the fine-dining world. After a heartbreaking death in his family, he comes home to Chicago to run his family sandwich shop — The Original Beef of Chicagoland. A world away from what he’s used to, Carmy must balance the soul-crushing realities of small business ownership, his strong-willed and recalcitrant kitchen staff, and his strained familial relationships. All of this, while grappling with the impact of his brother’s suicide. As Carmy fights to transform both The Original Beef of Chicagoland and himself, he works alongside a rough-around-the-edges kitchen crew that ultimately reveals themselves as his chosen family.

“The Bear has exceeded our wildest creative, critical, and commercial expectations,” said Eric Schrier, FX Entertainment President, in a statement. “We deeply appreciate the brilliant work led by Creator and Co-Showrunner Christopher Storer and Co-Showrunner Joanna Calo. Jeremy Allen White’s lead performance is spectacular, as are those of his co-stars Ebon Moss-Bachrach, Ayo Edebiri, Abby Elliott, Lionel Boyce, and Liza Colón-Zayas. We can’t wait to get to work on season two.”

“We are so grateful to FX, our insanely talented cast, our crew who worked hard, fast, and in the dead of winter, not to mention everyone who watched. And we can’t wait to bring you all back to The Bear in 2023,” added Christopher Storer and Joanna Calo, co-showrunners and executive producers.

What do you think? Have you watched The Bear TV show on FX on Hulu? Are you glad to hear that this comedy has been renewed for a second season?

It is seriously the best show I’ve seen in quite some time. Jeremy Allen is great in this role. Kudos to the whole cast, they are all phenomenal.