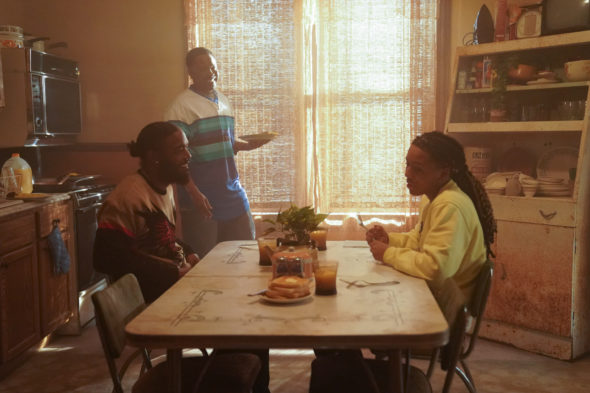 A certain group of Chicago residents will be back for a sixth season on Showtime. The cable channel has renewed The Chi for another year. The fifth season finishes airing on September 4th.

LOS ANGELES – August 18, 2022 – SHOWTIME has picked up the hit drama series THE CHI for a sixth season. Created and executive produced by Emmy(R) winner Lena Waithe (Twenties, Boomerang) and executive produced by Academy Award(R) and Emmy winner Common (Selma), THE CHI is a timely coming-of-age story centering on a group of residents on the South Side of Chicago who become linked by coincidence but bonded by the need for connection and redemption. The fifth season is currently airing Fridays on streaming and on demand and Sundays on-air at 9 p.m. PT/ET through the season finale, which will stream on September 2 and premiere on-air on Sunday, September 4. Season five is on pace to set a new record for the series in streaming, growing that audience by over 20% from last season. The sixth season will return to the network in 2023. Produced entirely in its namesake city, THE CHI is produced by 20th Television.

This season on THE CHI delves deeply into the many joys and complications of Black love: relationships, children, career, community and self. Emmett (Jacob Latimore) and Tiff (Hannaha Hall) forge ahead as co-parents, while Tiff moves in with Rob (Iman Shumpert). Kevin (Alex Hibbert) finds new love in gaming and Simone (Antonyah Allen), while Jake (Michael V. Epps) and Papa (Shamon Brown Jr.) try to resolve things with Jemma (Judae’a Brown) and Maisha (Genesis Denise Hale). New mom Kiesha (Birgundi Baker) works to build her life with baby Ronnie while pursuing her education, while Nina (Tyla Abercrumbie) and Dre (Miriam A. Hyman) work at rebuilding their union as they support Lynae (Zaria Imani Primer). Jada (Yolonda Ross) assesses her life post-cancer with Suede (Bernard Gilbert) and Darnell (Rolando Boyce), who makes a decision on his future with Dom (La La Anthony). Roselyn’s (Kandi Burruss) new pet project places her at odds with Tracy (Tai Davis). Shaad (Jason Weaver) gets level-up love from Deja (Carolyn Michelle Smith) and takes Bakari (Ahmad Ferguson) under his wing. Meanwhile, with Douda’s (Curtiss Cook) connections and a helping hand from Shaad and Marcus (Joel Steingold), Trig (Luke James) launches a political run to help his city, but at a potential cost to him and his family.

Showtime Networks Inc. (SNI), a wholly owned subsidiary of Paramount, owns and operates the premium service SHOWTIME(R), which features critically acclaimed original series, provocative documentaries, box-office hit films, comedy and music specials and hard-hitting sports. SHOWTIME is available as a stand-alone streaming service across all major streaming devices and Showtime.com, as well as via cable, DBS, telco and streaming video providers. SNI also operates the premium services THE MOVIE CHANNEL(TM) and FLIX(R), as well as on demand versions of all three brands. SNI markets and distributes sports and entertainment events for exhibition to subscribers on a pay-per-view basis through SHOWTIME PPV(R). For more information, go to www.SHO.com.

What do you think? Have you kept up with The Chi TV series? Are you glad that this drama has been renewed for a sixth season on Showtime?

So happy THE CHI will be back! I think it’s a great show with plenty of drama. Keep it comin’!