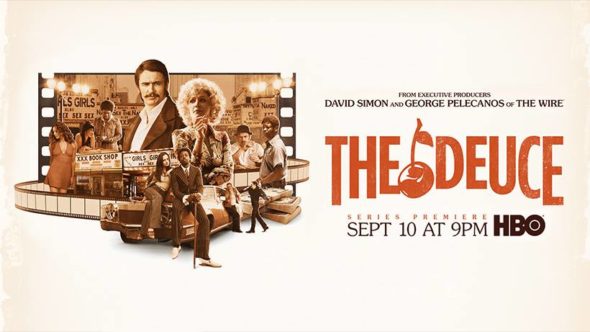 Since Girls and The Leftovers have ended and Vice Principals, Game of Thrones, and Veep are nearing the end, HBO needs to shore up its programming slate, to retain its paid subscribers and attract new ones. Will The Deuce TV show, from George Pelecanos and David Simon, fill the bill? Cancelled or renewed for season two? Stay tuned.

A fictional historical drama, inspired by real-life twins who would go on to operate business fronts for the Gambino family, The Deuce centers on the rise of modern-day pornography in 1970s New York City. Barkeep Vincent Martino (Franco) is something of a promotional wiz. Despite his reluctance, Gambino captain Rudy Pipilo (Rispoli) involves him in the sex trade. Vince’s identical twin, gambler Frankie Martino (Franco), has never shied away from accepting his brother’s help. He too finds himself growing more and more involved in Pipilo’s business. Meanwhile, weary hooker Candy (Gyllenhaal) sees great potential for a new means to make a living, and she is not alone.

What do you think? Do you like The Deuce TV series? Should this HBO TV show be cancelled or renewed for season two?