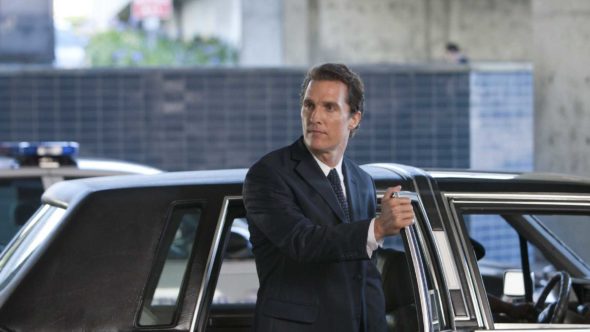 The Lincoln Lawyer is now coming to Netflix. The David E. Kelley drama series is based on the books by Michael Connelly. It had been ordered to series by CBS but, the network later cancelled those plans.

It will now land on Netflix with a 10-episode season order. Kelley and Ted Humphrey are behind the series. The CBS incarnation would have starred Logan Marshall-Green as Mickey Haller. Matthew McConaughey (above) starred in the film version.

Connelly talked about the series pickup in a blog post, per Deadline:

“I’m excited to announce that after a bit of a journey, Mickey Haller will come to life once again on screen — this time in the TV series adaptation of The Lincoln Lawyer coming to Netflix and starring the wonderful and talented Manuel Garcia-Rulfo.

Manuel is the ideal Mickey Haller, who is following in the footsteps of his attorney father with the showmanship of his Mexican movie star mother. He brings a powerful dynamic and dimension to the role — one that aligns with the books and brings authenticity to the Latinx heritage and roots of this Los Angeles-based story.”

The first season will be based on “The Brass Verdict,” which is the second book in The Lincoln Lawyer series of books released by Connelly.  There’s no word yet on when it will premiere.

What do you think? Do you plan to watch The Lincoln Lawyer series on Netflix?

I will miss Harry Bosch but I’m ready to welcome Mickey Haller. I was dreading the last season but now I have something really interesting to look forward to from Michael Connelly. Thanks to Netflix for picking up the show.

Count me in! I’ll watch anything that Michael Connelly has written.
He’s one of the most gifted story tellers out there.

Can’t wait to watch the Lincoln Lawyer love all his books especially Bosch. Please don’t kill him off on season 6 we need him back when his daughter is a prosecutor.

Absolutely…I’ve read all the Connelly books!! I’d love to see a series based on Renee Ballard as well!!

I will definitely watch it. I have read The Lincoln Lawyer and love Michael Connelly’s novels. Can’t wait!

Can’t Wait to see it! Please hurry up in post production and release!

yes I will definitely watch