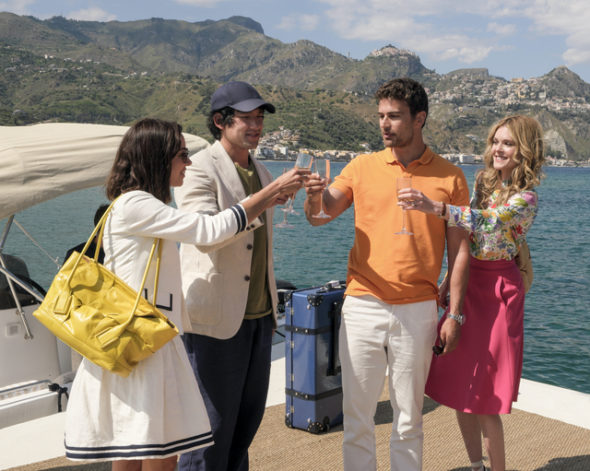 Mysteries abound in Sicily. Has The White Lotus TV show been cancelled or renewed for a third season on HBO? The television vulture is watching all the latest cancellation and renewal news, so this page is the place to track the status of The White Lotus, season three. Bookmark it, or subscribe for the latest updates. Remember, the television vulture is watching your shows. Are you?

A social satire anthology series airing on the HBO cable channel, The White Lotus stars F. Murray Abraham, Jennifer Coolidge, Adam DiMarco, Beatrice Grannò, Meghann Fahy, Jon Gries, Tom Hollander, Sabrina Impacciatore, Michael Imperioli, Theo James, Aubrey Plaza, Haley Lu Richardson, Will Sharpe, Simona Tabasco, and Leo Woodall. The story follows the exploits of various hotel guests and staff members over the span of a week at a resort in Sicily. Bert Di Grasso (Abraham) is visiting the city with his son (Imperioli) and grandson (DiMarco) and is getting frail but still sees himself as virile and capable. Wealthy but unstable Tanya McQuioid-Hunt (Coolidge) is traveling with her husband (Tries) and assistant (Richardson). Daphne Babcock (Fahy) is a stay-at-home mother who is visiting Italy with her husband (James) and another couple (Sharpe and Plaza).

The second season of The White Lotus averages a 0.08 rating in the 18-49 demographic and 482,000 viewers in the live+same day ratings (includes all DVR playback through 3:00 AM). Compared to season one, that’s down by 31% in the demo and down by 11% in viewership. While these numbers don’t include further delayed or streaming viewing, they are a very good indicator of how a show is performing, especially when compared to others on the same channel. Though other economic factors are involved, the higher-rated shows usually get renewed and the lower-rated ones get cancelled. Find out how The White Lotus stacks up against other HBO TV shows.

Will HBO cancel or renew The White Lotus for season three? The show draws good ratings for an HBO show and won numerous awards for its first season. As long as creator Mike Judge wants to make a third season, I think HBO will renew The White Lotus. I’ll update this page with breaking developments. Subscribe for free alerts on The White Lotus cancellation or renewal news.

What do you think? Are you glad that The White Lotus TV show hs been renewed for a third season? How would you feel if HBO had cancelled this TV series, instead?