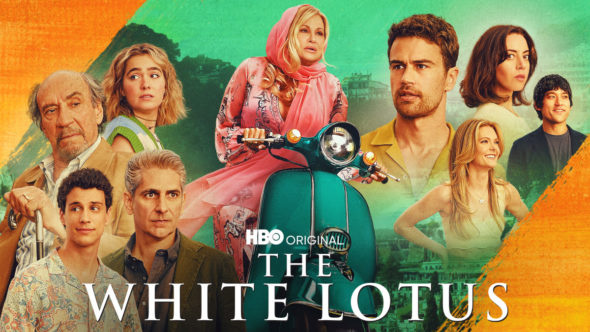 In this HBO show’s first season, viewership grew with each episode, and The White Lotus won numerous awards.  It was initially described as a limited series but the show became an anthology series, thanks to the success of the first season. Will season two measure up? Will The White Lotus be cancelled or renewed for season three? Stay tuned. *Status Update Below.

A social satire anthology series written and directed by Mike White, The White Lotus TV show stars F. Murray Abraham, Jennifer Coolidge, Adam DiMarco, Beatrice Grannò, Meghann Fahy, Jon Gries, Tom Hollander, Sabrina Impacciatore, Michael Imperioli, Theo James, Aubrey Plaza, Haley Lu Richardson, Will Sharpe, Simona Tabasco, and Leo Woodall. The story follows the exploits of various hotel guests and staff members over the span of a week at a resort in Sicily. Bert Di Grasso (Abraham) is visiting the city with his son (Imperioli) and grandson (DiMarco) and is getting frail but still sees himself as virile and capable. Wealthy but unstable Tanya McQuioid-Hunt (Coolidge) is traveling with her husband (Tries) and assistant (Richardson). Daphne Babcock (Fahy) is a stay-at-home mother who is visiting Italy with her husband (James) and another couple (Sharpe and Plaza).

For comparisons: Season one of The White Lotus on HBO averaged a 0.11 rating in the 18-49 demographic and 544,000 viewers in the live+same day ratings.

What do you think? Do you like the The White Lotus TV series on HBO? Should it be cancelled or renewed for a third season?

I love the white lotus,