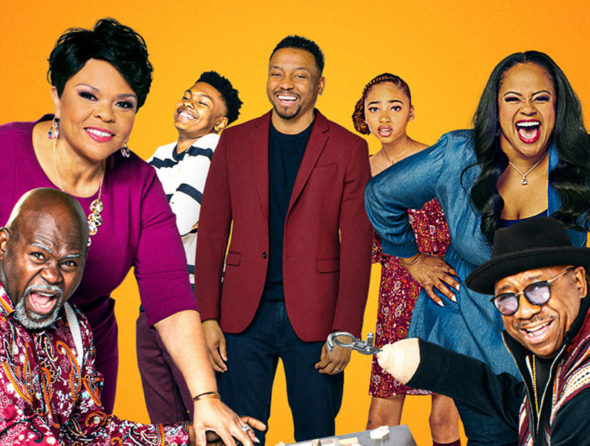 While scripted comedies on BET haven’t performed as well in the ratings as the channel’s original dramas, they have still done pretty good. Will Assisted Living be cancelled or renewed for season four? Stay tuned.

A family comedy series, the Tyler Perry’s Assisted Living TV show stars David Mann, Tamela Mann, J. Anthony Brown, Na’im Lynn, Courtney Nichole, Alex Henderson, and Tayler Buck with Nicolas S. Duvernay, Alretha Thomas, Damien Leake, and Chet Aknewe in recurring roles. In the story, Jeremy (Lynn) loses his job so he and his young family (Nichole, Buck, and Henderson) move to the backwoods of Georgia to help his eccentric grandfather. Jeremy’s Grandpa Vinny (Brown) has foolishly purchased a terribly run-down home for the elderly and he is in way over his head. Vinny’s prayers are answered (sort of) when Mr. Leroy S. Brown (David Mann) and his daughter, Cora (Tamela Mann) show up as needy investors (reprising their roles from Meet the Browns). In the new season, the Wilson family tries to cope with witnessing Lindor being arrested and roughed up by the police. Jeremy steps in as a father figure to help Lindor through this awful process, while Sandra and Philip struggle with their own feelings about the incident. Meanwhile, Mr. Brown and Vinny learn a few lessons about money, and everyone at the facility looks forward to celebrating a Wilson family milestone with Sandra graduating from high school.

For comparisons: Season two of Tyler Perry’s Assisted Living on BET averaged a 0.13 rating in the 18-49 demographic and 563,000 viewers.

What do you think? Do you like the Assisted Living TV series on BET? Should it be cancelled or renewed for a fourth season?

So funny so glad both sitcom back on look forward so good.