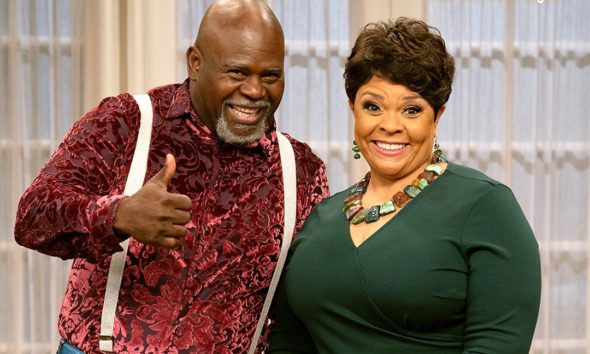 Can this business make a profit?  Has the Tyler Perry’s Assisted Living TV show been cancelled or renewed for a third season on BET? The television vulture is watching all the latest cancellation and renewal news, so this page is the place to track the status of Tyler Perry’s Assisted Living, season three. Bookmark it, or subscribe for the latest updates. Remember, the television vulture is watching your shows. Are you?

Airing on the BET cable channel, Tyler Perry’s Assisted Living stars David Mann, Tamela Mann, J. Anthony Brown, Na’im Lynn, Courtney Nichole, Tayler Buck, and Alex Henderson. In the story, Jeremy (Lynn) loses his job so he and his young family (Nichole, Buck, and Henderson) move to the backwoods of Georgia to help his eccentric grandfather. Jeremy’s Grandpa Vinny (Brown) has foolishly purchased a terribly run-down home for the elderly and he is in way over his head. Vinny’s prayers are answered (sort of) when Mr. Leroy S. Brown (David Mann) and his daughter, Cora (Tamela Mann) show up as needy investors (reprising their roles from Meet the Browns).

The second season of Tyler Perry’s Assisted Living averaged a 0.13 rating in the 18-49 demographic and 563,000 viewers in the live+same day ratings (includes all DVR playback through 3:00 AM). Compared to season one, that’s down by 37% in the demo and down by 32% in viewership. While these numbers don’t include further delayed or streaming viewing, they are a very good indicator of how a show is performing, especially when compared to others on the same channel. There can be other economic factors involved in a show’s fate, but typically the higher-rated series are renewed and the lower-rated ones are cancelled. Find out how Tyler Perry’s Assisted Living stacks up against other BET TV shows.

What do you think? Are you glad that the Tyler Perry’s Assisted Living TV show has been renewed for a third season? How would you feel if BET had cancelled this TV series, instead?