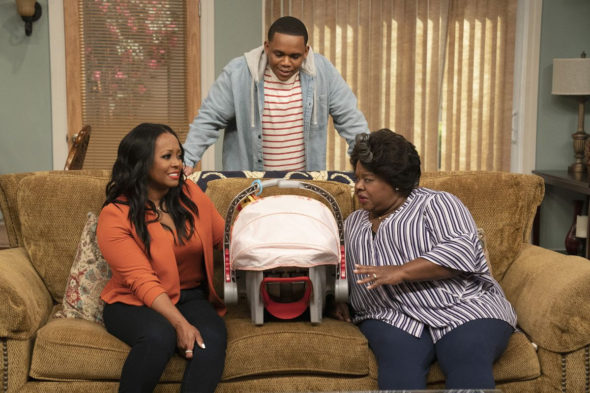 BET revealed more about the return of both shows in a press release.

“This Spring, spend your Wednesday nights with your BET families, as the new seasons of hit series Tyler Perry’s House of Payne (season nine) and Tyler Perry’s Assisted Living (season 3) premiere on Wednesday, March 23 on BET and BET Her. Airing weekly on a new night and time, catch new episodes of both each Wednesday, beginning at 9 PM ET/PT.

The ninth season of the hit comedy features retired fire chief Curtis Payne and his charming wife Ella, as the loving couple navigates the problems of life with their quirky modern-day family. In the new season, the Payne family welcomes its newest member, Baby Malisa. Malik Payne, the young man we watched grow up, becomes a father. CJ and Janine become grandparents, although CJ hilariously will not let anyone call him grandfather. With the arrival of a beautiful new baby, Malik and Lisa begin to change. Starring LaVan Davis as “Curtis Payne,” Cassi Davis Patton as “Ella Payne,” Allen Payne as “C.J. Payne,” Lance Gross as “Calvin Payne,” Larramie “Doc” Shaw as “Malik Payne,” and Keshia Knight Pulliam as “Miranda Payne.” Ahmarie Holmes as “Lisa,” Quin Walters as “Laura,” Cheryl Pepsi Riley as “Gloria,” Clayton English as “Peanut” and Quincy Bonds as “Pookie” join as recurring characters.

About TYLER PERRY’S ASSISTED LIVING airing on a NEW NIGHT Wednesdays at 9:30 PM ET/PT on BET and BET Her

In season three of Tyler Perry’s comedy series Assisted Living, Mr. Brown, Cora, and the gang run their assisted living facility along with hilarious variety of personalities who live in the home, bringing with them a ton of laughs and experiences. In the new season, the Wilson family tries to cope with witnessing Lindor being arrested and roughed up by the police. Jeremy steps in as a father figure to help Lindor through this awful process, while Sandra and Philip struggle with their own feelings about the incident. Meanwhile, Mr. Brown and Vinny learn a few lessons about money, and everyone at the facility looks forward to celebrating a Wilson family milestone with Sandra graduating from high school. Starring David Mann as “Mr. Brown,” Tamela Mann as “Cora,” J. Anthony Brown as “Vinny,” Na’im Lynn as “Jeremy,” Courtney Nichole as “Leah,” Alex Henderson as “Philip,” and Tayler Buck as “Sandra.” Nicolas S. Duvernay as “Lindor,” Alretha Thomas as “Anastasia,” Damien Leake as “Reginald Junie” and Chet Aknewe as “Efe” join as recurring characters. Assisted Living was ranked the #1 scripted comedy series on cable for Black viewers P2+ in calendar year 2021.”

What do you think? Are you excited to see House of Payne and Assisted Living back on BET starting next week?

Why is every show this guy involved in got his name on it… I mean marketing sure, but this much?

Love HOP
AL Not so much.., waiting to see what happens to Jeanine