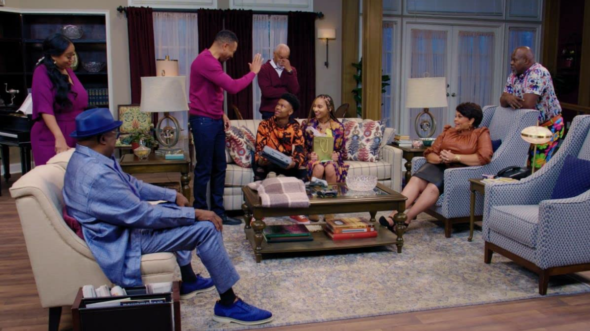 How crazy can this home get? Has the Tyler Perry’s Assisted Living TV show been cancelled or renewed for a fourth season on BET? The television vulture is watching all the latest cancellation and renewal news, so this page is the place to track the status of Assisted Living, season four. Bookmark it, or subscribe for the latest updates. Remember, the television vulture is watching your shows. Are you?

Airing on the BET cable channel, the Tyler Perry’s Assisted Living TV show stars David Mann, Tamela Mann, J. Anthony Brown, Na’im Lynn, Courtney Nichole, Alex Henderson, and Tayler Buck with Nicolas S. Duvernay, Alretha Thomas, Damien Leake, and Chet Aknewe in recurring roles. In the story, Jeremy (Lynn) loses his job so he and his young family (Nichole, Buck, and Henderson) move to the backwoods of Georgia to help his eccentric grandfather. Jeremy’s Grandpa Vinny (Brown) has foolishly purchased a terribly run-down home for the elderly and he is in way over his head. Vinny’s prayers are answered (sort of) when Mr. Leroy S. Brown (David Mann) and his daughter, Cora (Tamela Mann) show up as needy investors (reprising their roles from Meet the Browns). In the new season, the Wilson family tries to cope with witnessing Lindor being arrested and roughed up by the police. Jeremy steps in as a father figure to help Lindor through this awful process, while Sandra and Philip struggle with their own feelings about the incident. Meanwhile, Mr. Brown and Vinny learn a few lessons about money, and everyone at the facility looks forward to celebrating a Wilson family milestone with Sandra graduating from high school.

The third season of Assisted Living averages a 0.10 rating in the 18-49 demographic and 500,000 viewers in the live+same day ratings (includes all DVR playback through 3:00 AM). Compared to season two, that’s down by 26% in the demo and down by 11% in viewership. While these numbers don’t include further delayed or streaming viewing, they are a very good indicator of how a show is performing, especially when compared to others on the same channel. There can be other economic factors involved in a show’s fate, but the higher-rated series are usually renewed and the lower-rated ones are cancelled. Find out how Assisted Living stacks up against other BET TV shows.

Will BET cancel or renew Assisted Living for season four? This comedy has done quite well for the channel and I think it’s a safe bet that it will be renewed for a fourth year. I’ll update this page with breaking developments. Subscribe for free alerts on Assisted Living cancellation or renewal news.

What do you think? Do you hope that the Assisted Living TV show will be renewed for a fourth season? How would you feel if BET cancelled this TV series, instead?