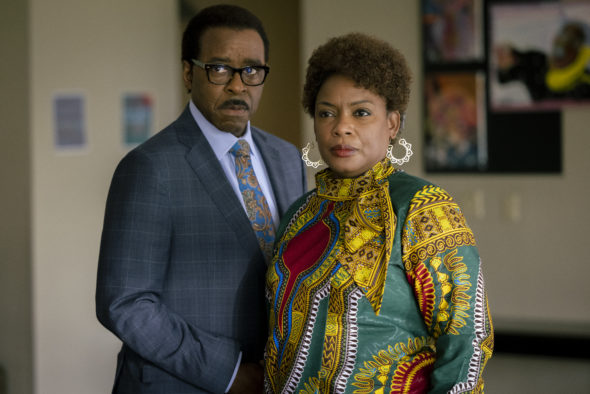 Are things as they seem in the first season of the 61st Street TV show on AMC? As we all know, the Nielsen ratings typically play a big role in determining whether a TV show like 61st Street is cancelled or renewed for season two. Unfortunately, most of us do not live in Nielsen households. Because many viewers feel frustrated when their viewing habits and opinions aren’t considered, we invite you to rate all of the first season episodes of 61st Street here.

An AMC crime thriller series, the 61st Street TV show stars Courtney B. Vance, Aunjanue Ellis, Mark O’Brien, Holt McCallany, Tosin Cole, Andrene Ward-Hammond, and Bentley Green. In the story, Moses Johnson (Cole) is a promising, Black high school athlete, who is swept up into the infamously corrupt Chicago criminal justice system. Taken by the police as a supposed gang member, he finds himself in the eye of the storm as police and prosecutors seek revenge for the death of an officer during a drug bust gone wrong. Franklin Roberts (Vance) is a public defender in the twilight of his career who’s serving the busiest courthouse in America. After promising his wife he’d retire to spend more time with their 17-year-old autistic son, Franklin realizes Moses is the case of a lifetime — one that can upend the entire Chicago judicial system and challenge the institutional racism and endemic corruption at its heart. The series was informed by deep research into the city’s history, as well as the personal experiences of executive producer-writer J. David Shanks. He grew up as a young Black man on the South Side and later became a Chicago police officer.

What do you think? Which season one episodes of the 61st Street TV series do you rate as wonderful, terrible, or somewhere between? Are you glad that 61st Street has been renewed for a second season on AMC? Don’t forget to vote, and share your thoughts, below.

I was an extra on this show and saw it for the first time tonight. The back story was incredible along with the first episode WOW what an adrenaline rush can’t wait to see the next one. I’m also honored to be a part of it as a corrections officer. Thank you for letting me be a part of something special that I will keep in my hear