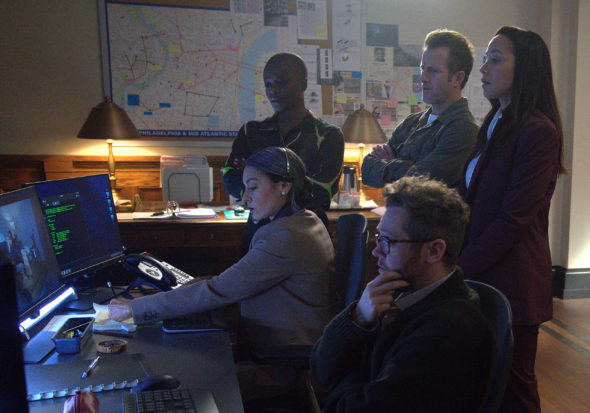 Two detectives continue the most important case of their lives. Has the Alert: Missing Persons Unit TV show been cancelled or renewed for a second season on FOX? The television vulture is watching all the latest cancellation and renewal news, so this page is the place to track the status of Alert: Missing Persons Unit, season two. Bookmark it, or subscribe for the latest updates. Remember, the television vulture is watching your shows. Are you?

A police procedural drama series airing on the FOX television network, the Alert: Missing Persons Unit TV show stars Scott Caan, Dania Ramirez, Adeola Role, Ryan Broussard, and Graham Verchere, with Petey Gibson and Fivel Stewart in recurring roles. The story revolves around the personnel and investigations of the Philadelphia Police Department’s Missing Persons Unit (MPU). The unit is headed by Nikki Batista (Ramirez) whose marriage to Jason Grant (Caan) deteriorated after their son Keith (Verchere) went missing six years ago. Now working as a private investigator, Jason receives a possible “proof of life” photo that Keith may still be alive. As a result, Nikki recruits him to join the unit. At the MPU, they work alongside a team of highly skilled individuals. Mike Sherman (Broussard) is Batista’s current love interest and they met when he was assigned to oversee the search for Keith. Kemi Adebayo (Role) is proficient in many languages, highly discerning of visual clues, and uses her know-how as a shaman to take a holistic approach to her job. There’s also forensic anthropologist C (Gibson), who is a master at reconstructing the faces of those who have disappeared. Together, the team works to find the missing, abducted, or kidnapped before it’s too late and reunite them with their loved ones.

The first season of Alert: Missing Persons Unit averages a 0.36 rating in the 18-49 demographic and 2.26 million viewers. While these numbers don’t include further delayed or streaming viewing, they are a very good indicator of how a show is performing, especially when compared to others on the same channel. There can be other economic factors involved in a show’s fate, but typically the higher-rated series are renewed and the lower-rated ones are cancelled. Find out how Alert: Missing Persons Unit stacks up against other FOX TV shows.

Will FOX cancel or renew Alert: Missing Persons Unit for season two? The network is on the hunt for successful dramas that are produced by FOX’s own production company. This series is a co-production with Sony Pictures Television and the company has a history of making financially attractive deals to keep their shows on the air. Alert got off to a good start (thanks to having football as a lead-in) and it will be interesting to see how well it performs in its regular Monday night timeslot. I think there’s a very good chance it will be renewed.  I’ll update this page with breaking developments. Subscribe for free alerts on Alert: Missing Persons Unit cancellation or renewal news.

What do you think? Do you hope that the Alert: Missing Persons Unit TV show will be renewed for a second season? How would you feel if FOX cancelled this TV series, instead?

Look forward to seeing it new series Monday night drama so cool and love it.

Was disappointed to see Scott Caan in a totally discombobulated and disjointed show.